Eric Raymond over at Irish Calvinist quotes James White in a clarification of the doctrine of sola scriptura. I think this really gets confused in a lot of people’s minds. Growing up Baptist and then charismatic in college, I always assumed a high and “only” view of the Bible. Nonetheless, both groups end up coloring the idea of “scripture alone” in various directions. That’s fine of course (to some degree) and to be expected. The reformed crowd appears to be shooting for more of a historical take on the doctrine. They are asking, “What did “scripture alone” mean to the early reformers?” It ends up being colored a reformed shade, but probably a little more carefully. 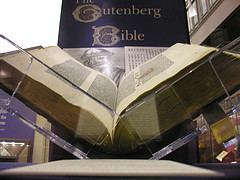 Anyway, the reason I think all of this is worth bringing up is because sola scriptura really IS very important to Christianity. When you marginalize it, you set yourself up for all sorts of trouble.

Sola sciptura is not a….

A Summary of sola scriptura…

In the charismatic circle I was part of, Smith Wigglesworth (an early 20th century evangelist) was held up as a hero. He ONLY read the Bible, owned no other books, and was credited with making people throw their newspapers away when he was around. This was seen as something to stand in awe of. Reading the bible daily was pushed really hard. (Which is great!) But reading much of anything else was thought to have little value. This is just part of the anti-intellectual atmosphere that appears to exist in most charismatic circles. We used to look at the reformed folks with their Bible sitting next to Virgil and Tacitus and just shake our heads. How can that other stuff possibly be of any use? Especially old pagan writers! Why don’t you just read the bible? (There is actually a decent answer to this.)

I think it’s most important to remember points #2 and #5 from above.

We don’t NEED anything besides scripture, but other things CAN be very helpful.

Everything we do (traditions, ideas, methods) are subject to the HIGHER authority of scripture.