After a third stab at it, the reading of Tolkien’s Silmarillion progresses on, even though it be very dry at times. It keeps moving because once on at least every page, there is some foreshadowing of both good and ill. Strife between brothers offers warnings of further strife and also opportunity for healing and self-sacrifice. Tales of victory carry with them foreboding of future battle.

In many ways, we see the elves sought to remake their favorite memories from their unstained days with the gods, the Valar. On middle earth they make copies of their favorite gardens, towers, ships, and magic of the elder days. Even the magic jewels themselves, of which the tale is named after, were essentially copies of the two light-giving trees of blessed realm. It is like the world within a world in Narnia, near the end of the final book. Further up and further in you find the same world, only more real. The one you thought you knew was an image. 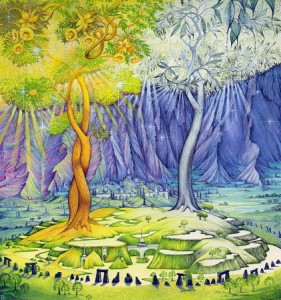 It seems to me that we are the same sort of folk, in the same situation. The temple of Israel was a shadow, remade by human hands with relatively perishable materials – a copy of the wonderful and worshipful throne room in the heavenly realm. The Lord’s Table is like a slight imitation of the perfect table of fellowship between God and his people. If these two are images, then the place where we break bread must be an imitation of something heavenly, just like the temple, and not just a re-creation of what happend between Jesus and the twelve in the upper room. That too was still here on earth. There is a wedding feast in dreams that has yet to materialize, though He has promised it.

Nothing is really sacrificed in the heavenly temple. The sacrifices we made in our copy were shadows, bought down to our level and to be done away with as time progressed. It is still progressing. It seems to me that the notion that the Lord’s Table is a re-sacrifice misses the point. A memorial, yes, but not a RE-anything. Nevertheless, I do not believe the Lord will damn any of us for treating it as such. I imagine him just rolling his eyes and then loving and dwelling with us anyway. Now we see as in a glass darkly, then, later, we shall see face to face and we will cast off our childhood and be a mature and marriageable bride. We will discover that he has grown us up from the ground for just this purpose.