Philip Jenkins opens his book The Next Christendom by providing some intriguing examples of the nearsightedness of Americans and Europeans. This goes both for the general public and for scholars who should know better.

When the popular evangelical magazine Christian History listed the “hundred most important events in Church history,” the only mention of Africa, Asia, or Latin America occurred in reference to the British abolition of the slave trade. Missing from this top hundred was church growth in modern Africa, where the number of Christians increased, staggeringly, from 10 million in 1900 to 360 million by 2000. If that growth does not represent the largest quantitative change in the whole of religious history, I am at a loss to think of a rival.

-Philip Jenkins, The Next Christendom, p.4

A growth of 350 million Christians in one century? Holy smokes. And it’s almost completely outside of our consciousness. I had barely ever heard of this. I remember, as a young man in 1997, all the publicity and hubbub surrounding the “Stand in the Gap” gathering where evangelical leaders worked very hard to get 1 million Christian men to show up at a rally in Washington D.C. They were able to pull it off, effectively bankrupting the Promise Keepers organization in the process. I had attended a conference of theirs in Boise the year before with my father. (I really enjoyed it.) I don’t think deriving value from numbers is a wise game to play, but this ought to make us take a bit of notice. 1 million! Go us! We’re so awesome! We’re the main event when it comes to the work of God on earth! Once again, it’s eye-opening to zoom out and look at the big picture (350,000,000 growth across the pond.) 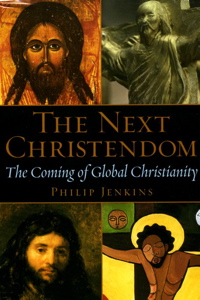 He gives another example that I’ve also experienced first-hand on many occasions.

When I was working on the first edition of this book, I described its general theme to friends and colleagues, many of whom are well education and widely traveled. When I said, though, that my theme was “the future of Christianity”, a common follow-up question was, in effect “So, how long do you think it will last?” or specifically, “How long can the Catholic Church survive?” In their own way, secular, liberal Americans have a distinctly apocalyptic view of the future, with a millenarian expectation of the uprooting of organized religion. A the least, there is a widespread conviction that Christianity cannot survive in anything like its present form.

In most academic circles, Christianity is laughed off as a bad joke from the past. But again, zoom out, and you’ll find that liberal secularism is quickly becoming yesterday’s bad joke. They still have enough money and political clout to insulate them from noticing. Give it a few more generations and things could look pretty different. I think we, as Christians, make a mistake when we buy into their own picture of the world. We spend hundreds of hours of sweat to combat atheism and win one convert. We spend that time and money again getting the city council to implement a particular shade of moralism. Perhaps, if we were to glance at Africa for a model, we could spend less on toys and use that time and money to have a few more babies! Just sayin’.