Once again, I can’t help thinking that Girard could have helped Leithart’s thesis about Constantine. In the end, he concludes that Rome’s baptism was an infant one – that Constantine was a Christian, just an immature one. Why conclude that his philosophy on slaveholding would immediately look as fully developed as something from James Madison? Other people are appalled that he didn’t lay down his sword or disband the army. Isn’t that what a REAL Christian would do? Seriously though, how could such a thing even enter his imagination? People argue about philosophies and ideologies and belief systems, but Girard says those aren’t the things that really drive people. People are driven by mimetic desire. So if Constantine wasn’t as good of Christian as we modern folk want him to be, it wasn’t for lack of faith, but for lack of a MODEL. What does running an empire in a non-brutal, non-pagan way even look like? Did anyone in AD 313 have much of a clue? Well, clues, absolutely, but a fully formed accurate vision? Good grief, no. So we got a mixed bag. So what? 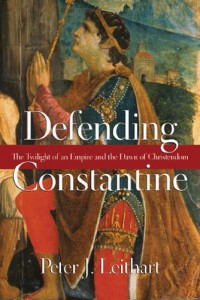 George W. Bush was a contemporary evangelical head of a national super-power and he was DEFINITELY a mixed bag. And he had all of the best Christian reformers and saints of the last thousand years to look to. Perhaps he was just paralyzed by politics? The impression I often get from Bush is that he was well-meaning but confused. Perhaps he had too many advisors, too many options. Constantine, on the other hand, seems to have been well-meaning, but impulsive – trying to find his way and, when faced with a crisis would occasionally fall back into the old imperial ways of executing a few people here and there to seemingly patch things up.

I don’t deny that the Holy Spirit works in the hearts and minds of men. He does all the time. God has all the time in the world though. Over and over we see that He often performs his works over the course of many generations. Our lives are such tiny little puffs of smoke, we want him to heal us overnight! But He is telling a long story. People want Constantine to be so much better than he really was. But if he can’t be that, then they flip it around and use him as a handy scapegoat and the root of many of the Church’s very real problems during the middle ages.

As for Leithart’s book, one of the endorsements states that he “helpfully complicates Christian history”. That is accurate I think, even if he is misreading his critics, (as they argue he is) or if some of his conclusions seem strange or radical.  Any time someone is being utterly dismissed, some complication is healthy. When skeptics seek to complicate everything, they are doing it to pull the world down into the void. When a Christian seeks to complicate things, it should be to ask “Can we try to extend grace to this flawed person?”