I found Kierkegaard to be a real grind when I tried to plow through a large anthology of his earlier this year. This boiled-down summary by Christopher Ben Simpson is really quite the accomplishment. I’m very impressed. It still found I could only read it when I was at peak wakefulness though. (Hi-len-ya) That’s why it took so long to finish. These excerpts are from a few good passages from near the end of the book. 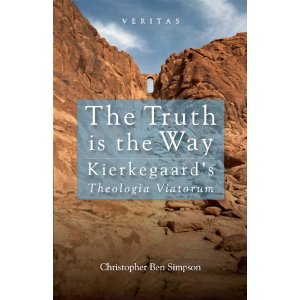 On the danger that comes from theology trying to be too much like philosophy. Calvin is also at his weakest when he goes this route on occasion.

When theology tries to model itself after a purely speculative philosophy, theology, as de Silentio [one of Kierkegaard’s many pseudonyms] puts it, ‘sits all rouged and powdered in the window and courts its favor, offers its charms to philosophy’ – theology has lost its way, has lost fidelity to its purpose as leading one on the way [to the truth].

A wonderful conception of creation contra-deism. I love the phrase “the something that is something”.

The wondrousness of creation is not to produce something that is nothing in relations to the Creator, but to produce something that is something. In creation, God lets there be something other than himself; ‘God’s creator-words’ are ‘Let there be’. God’s creation is a coming into existence from nothing. It is a transition from possibility to actuality. This change of ‘coming into existence’ is a change unlike any other -for all other change presupposes existence. This action of God is not necessary, but the actuality it yields – here, actuality as such – is the fruit of decision.

This next part is very much in line with Girard’s mimetic anthropology. I’m going to reuse this later for sure.

For Kierkegaard, the world – the established order of the human social world – is structured according to this untruth such that the deformed relation is the norm. The world ‘wants to be deceived’ and is ruled by ‘illusions’. The crowd, Kierkegaard writes, ‘is untruth if it is supposed to be valid as the authority for what truth is’. The crowd’s ‘untruth’ lies in making ‘the numerical’ the authority. The mechanism for the untruth of the crowd or the world is in making ‘human approval’ and human comparison (and thus envy and fear) – ‘the way others regard one’ – to be the criterion for human value, such that one ‘is what “the others” make of him and what he makes of himself by being only before others’ and so ‘sinks under comparison’s enormous weight’.

This view ‘assumes that on average most people, the majority of people, are of the truth’ and thus ‘we are governed, educated, and brought up according to mankind’s conception of what it means to be a human being’. But this view for Kierkegaard, is an inversion: it sees sin as a joke; it does not esteem humanity’s eternal end; it has (relative to Christianity) ‘completely opposite conceptions’ of sanity and wisdom; ‘the noble act is regarded as stupidity, the evil act of sagacity’.

Wow. That’s dynamite. (And not exactly an apologia for democracy either!)

I have heard a lot of sermons on hell that were terribly boring. “Hell is separation from God”. OK. Yes, but talk about a phrase falling flat! Someone needs to add some punch to it – like C.S. Lewis did describing his sin as a “harem of fondled hatreds”. Ick! Fortunately, Kierkegaard’s passing reference to hell is a good one:

By wanting to do away with the eternal or reducing the eternal to the temporal, one is alienated from one’s source. This futile human defection from one’s being establishes the abyss, the greatest distance between God and a human being – enclosed  in one’s own private room of sovereignty and torment.

Other religions contain some concept of grace and covering, but none go to near the extreme that orthodox Christianity does. This next point about Jesus is really quite striking.

This next passage, commenting on law and gospel (remember, Kierkegaard was a Lutheran!) reminds me of that wonderful quote from Chesterton: “Christianity got over the difficulty of combining furious opposites, by keeping them both, and keeping them both furious.”

Inasmuch as there is to be striving, he [Jesus] is the prototype whom one ought to resemble, but the prototype is also the Saviour and Redeemer who helps the Christian to be like the prototype.

A great comment on being a disciple of Christ versus a follower of a law or teaching:

For Kierkegaard, following in the way of Christ is often presented in terms of Christian existence as striving to imitate Christ as the Prototype. He writes in his journals: ‘As soon as there is a prototype, there is the obligation to imitation What does imitation mean? It means striving to conform my life to the prototype’. Christians are thus, ‘not adherents of a teaching but imitators of a life‘. Imitation [Efterfolgelse] is to follow – as a ‘pilgrim’ who would follow Christ in his ‘footprints’. As the Prototype, Christ’s life is a ‘summons’ – calling ‘follow me’ – calling one to be a ‘disciple’, one who strives to ‘resemble’ Christ.

Some drive-by comments on the predestination/free will mystery. I like the highlighted part especially.

God’s help is empowering and participatory, not coercing. The Spirit’s empowering and enabling is described as ‘invisible’, such that ‘to be helped by it is to learn to walk alone’, that is help is like instinct in a bird. God’s help co-operates with our own resolution, our own acting. Christ to us alternates between the Prototype for our imitation and the Saviour who is our help. Kierkegaard reflects in his journals: ‘”The prototype”, which is Christ, then changes into something else, to grace and compassion, and it is he himself who reaches out to support you’. In this receptive moment, we are in communion with God, are given God’s gracious presence in the Holy Spirit.

Whoa, and this next passage sounds like something straight out of Larry Crabb. Good stuff.

On the basis of one’s relationship with God, one can come to see that the provision for one’s emotional needs – value, security and purpose – are not dependent upon others but are ultimately met by God. Kierkegaard does not ignore our need and desire, he simply sees that our deepest need is for God. Indeed, this need is ‘the greatest riches’ because it reveals God as one’s true object of love and as the fulfillment of one’s highest happiness. All else will never lead to the fulfillment that we truly desire. True satisfaction, true self-love and true proper pride are only to be found in relation to God. Because of one’s God-relationship, one can know and feel one’s deep value.

God has created us in his own image with a ‘dowry of good nature and of love’. Thus, there lies within us the inner glory of God’s highest creation, and because of this quality present in all people, all people are equally invaluable.

And again in describing the nature of human love – this is like a flashback to MIRROR. (A helpful course developed by the church I attended in college based largely on Crabb’s work.)

Before God, the ravenous lack that haunts our relationships can become the filled chest of satisfaction and fruition that frees us to love others without ulterior motives. Before God, on passes from emptiness, sickness and starvation to fullness, health and overabundance. With this filling, one can love as from a deep reserve; one ‘loves with all his love; it is totally present in every expression; he continually spends all of it, and yet he continually keeps all in his heart’.

And finally a passage about how love “sees the best in others” and through that produces more love. It’s sort of like a self-fulfilling prophecy. Assuming love in the other can, amazingly, create it out of thin air. (Sometimes anyway.)

As we communicate these virtues to others we communicate communication, furthering, continuing, repeating the exchange of community. This ‘communication’ can be seen in the way in which love ‘presupposes’ love in the other. Loving another means seeing the potential for the best in them and so presupposing love to be present within them. In this way love ‘draws out the good’, ‘loves forth love’ by presupposing ‘that it is present in the ground’. Love gives the gift by seeing the other as already in possession of it.

This also happens to be the opposite of scapegoating.