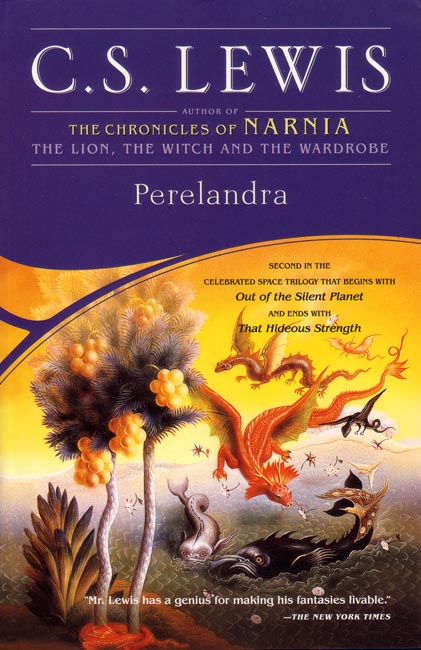 Lewis’s space trilogy is often forgotten in the shadow of the Chronicles of Narnia. There are many reasons for this: It’s confusing at times, the first book is the weakest (preventing people from continuing), it doesn’t appeal to children and it feels a bit too influenced by Charles Williams. The third and final book in the series, That Hideous Strength is still by far the best and can be read all on it’s own.

Somehow my mother gave me these books to read when I was about 13. The first book was fairly forgettable. The second, Perelandra seemed to drag on and on in the middle and then… WHAT!!! This book sticks in my mind so strongly because of it’s climax. It’s the first (and maybe the last) time I’ve ever been truly SHOCKED at way a story turned. I remember sitting in the chair in my bedroom some quiet summer afternoon and standing up with wide eyes. Holy smokes. Dare I even say what it is lest I spoil it for someone who hasn’t read it?

The hero, Ransom, is stranded on Venus. His job is to talk the Eve character on this new world into keeping God’s command and not falling into sin. Arguing with him is essentially the devil, possessing Dr. Weston, another man from earth. They argue back and forth. Sometimes Ransom’s reasoning appears to have the upper hand. At other times the evil force appears to be gaining ground with her. The problem is, Ransom is growing increasingly weary. He can’t sleep and the evil seems tireless. The Eve character is close to falling. It drags on and on – so much talking. How on earth is this going to be resolved? Lewis is famous for being a Christian apologist and one of the most brilliant and well-read men of the 20th century. Isn’t his hero going to come up with some sort of clever way to talk down the devil’s advocate? Ha. That’s what you think.

Suddenly, Ransom wakes up one morning and realizes what he must do. He must KILL the evil man, with his BARE HANDS. What follows is a brutal strangulation attempt and chase. Ransom is permanently wounded, but completes his task. Maybe someone saw that coming, but I didn’t. It still gives me shivers many years later.