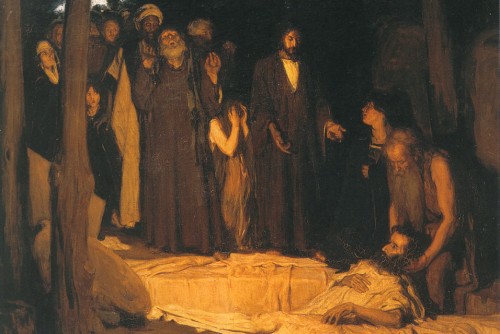 Now we come to see the divine nature of Jesus here. The time for sadness is over. For a moment now, he is going to give us a hint of what the power of the resurrection is really like. Jesus commands the dead Lazarus in the same tone of voice as he earlier commanded the storm to still earlier when he was on the boat.

Imagine yourself for a moment as something else in nature. Can you imagine being a rock? I think it would be a very boring existence, just being a stone there, maybe as part of the pavement of a road if you’re lucky. I think I would get pretty sleepy. But then Jesus speaks up, WHOA! What was that?? Holy smokes, that is the voice of my creator. That rock isn’t asleep anymore. That wind that was howling and just doing its thing on the sea of Galilee earlier? It stopped on a dime. Jesus holds sway over all of nature.

The same goes for dead bodies. Notice how much Lazarus had to DO to wake up. How hard did he have to work? Did he hear Jesus’s voice and (fortunately) decide to come out and see him? Of course not. He was a corpse.

The disciples did not yet fully understand this at the time. Martha confessed her faith that Jesus was the Messiah and could easily have healed Lazarus earlier, but it hasn’t entered her imagination yet that he can just as easily heal him after the fact. Her faith is about to be expanded.

These next few things I have to say about the subject are a mix of my own thoughts and some some commentary by theologian Robert Capon, a writer I’ve been influenced by quite a bit. These aren’t really my ideas, but they make me very excited to be a Christian!

For Lazarus to stay dead was a metaphysical impossibility! You can’t get away from a love that will not let you go. When Jesus, the Resurrection and the Life says, “Lazarus, come forth!”, the rest of the story doesn’t depend on Lazarus. Jesus wasn’t dealing with someone who just needed a pep talk to get their act together. He was dealing with a dead body.

You remember when Martha was worried about opening up the tomb because of the terrible smell? She spoke the whole truth not only about Lazarus but about every one of us in particular and about the human race in general. ‘Lord, by now we stink.’ We have been dead four days, four thousand days, four hundred thousand times four thousand days. In the midst of all our life we have been in death. And in the midst of that abiding death we have been in Nothing. Knee-deep in it, waist-deep in it, up to our noses and over our heads in Not-a-Thing.

But Jesus shouts to us in the mire to wake us up, to pull us up. Making things jump out of nothing is God’s favorite act. He creates us out of it (ex nihilo) and he raises us up from in. Jesus came to raise the dead. Not to improve the improvable, not to perfect the perfectible, not to teach the teachable. That stuff doesn’t work and he knows it. Those things only work on nice health people, but that’s not us. We’re dead, dead in our sin and helpless to even role over. But he, the Son of God is our total help.

He holds us now, even as he held Lazarus in the tomb and kept his body from decaying so that he could wake him back up and show the Glory of God to all the people around watching. A few years later, Lazarus kicked the bucket again and was buried for a long time, just like we will be. But because Christ has conquered death, he will hold us in his love even then and raise us to eternal life at the end of days.. The seventh sign of John was the raising of Lazarus. But that miracle was resuscitation back into the fallen world. Jesus’ own resurrection, the one that we follow him in, is a resurrection into a deathless world. That is our permanent hope in Christ.

Now, I know this is a Sunday and you’ve all shown up in a church building, so one might be able to assume that everyone here more or less believes all this stuff in the Bible about Jesus. You may be confused about how many of these stories (or my explanations!) you believe or not. If you think this account about Jesus raising some guy from the dead a long time ago is only a myth, then congratulations – you are part of a large company when it comes to the entire world.

Now I could try to show you archeological evidence proving that Jesus really existed and was held in amazingly high regard. There are old manuscripts that have been dug up dating the book of John from the first century. Some folks really get a kick out of that sort of thing, but I doubt any of those things mean anything to you today. Honestly, they don’t to me. The reason I find this story about Jesus so compelling is the picture of unmerited grace and unaided power it provides. When I get angry at my kids (and there are four of them now, so there is plenty of opportunity to completely lose my gourd), or when I fight with my wife about something stupid, when that happens I feel like a dirtbag. The same goes for when I feel lazy at work. I can make excuses like complaining that I don’t have enough money or time to do a good job at (fill in the blank), or blame my problems on other people. I don’t buy the modern wisdom that this guilt I feel is just some kind of social conditioning or imaginary religious oppression. I know what’s beautiful when I see it and I know what’s ugly. So do you, right? And in myself I see a whole lot of ugly, a whole lot of decay. My heart is still beating and I’m walking around, but it’s like a prelude to death. I’m up to my eyeballs in shortcomings and seriously, it’s not getting any better! You can “get religion” and that won’t help – I got it when I was young– you just might notice it a little more if you do.

But if there is any meaning in this life, if there is a God who cared enough about our race to make it out of nothing, who cares enough to sustain MY little life here and let me keep breathing, then he must love me very much indeed. When Jesus raised Lazarus from the dead, he wasn’t playing the role of a life coach but rather a death-defying Messiah, whether Lazarus deserved it or not. (Hint: He didn’t deserve it and I definitely don’t and neither do you.) But that sort of love is the only kind worth having. Christ alone dispenses that to me, to you, every day. I’m certain of it.