My gosh, what a title. What could this possibly be about? Just that. 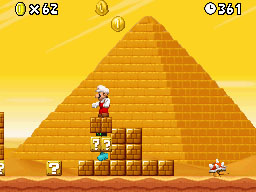 Are you familiar with the Super Mario Brothers video games? Of course you are. The franchise is still going strong. I grew up playing everything from the original old school Nintendo titles to the most recent Super Mario Galaxy 2 on the Wii, which my kids love. From very early on in the game’s history, Mario has had to visit desert worlds and fight his way through quicksand, snakes, cactus monsters, the angry hot sun, whirlwinds, and all the usual sorts of adventuresome things you might find in a desert. And what is always there in the background, scrolling along or on each side of the map as you wind your way through? Pyramids. Lots of pyramids. Some games even include levels inside of scary pyramids, usually inhabited by a mummy of some sort. It’s obviously all a cartoonish reference to ancient Egypt. It can’t possibly be anything else.

But now for the music. What is deserty music? Something middle eastern, right? Sure. So what have many of the Mario games features in the soundtrack over the years? Wait for it… sitar. The East Indian sitar and tabla drums. Now in case you are geographically challenged, India doesn’t have squat to do with Egypt, pyramids, or the Sahara desert. It is thousands of miles to the east and inhabited by Hindi people of an entirely different genealogical and cultural line as that of northern Africa or the Arabian peninsula. The time is also all out of whack too. The great Pharaohs who built the pyramids and filled them with creepy mummies lived in antiquity. We are talking 2000 BC and such. The sitar is not an ancient Indian folk instrument of a similar era, but rather a relatively modern development from 18th century eastern classical music. The sitar really came in to common use about the time Bach was writing his violin concertos and organ works in Germany. True story.

The following recording is a great example of what I’m talking about with the Mario soundtracks. This one is from the “Dusty Dunes Galaxy”.

I’m probably not the first person to point this out. Also, don’t think that by doing so I am critical of the eclectic combination. I am not! I love Mario. I love the desert motif, and I really dig the sitar music. It’s all great! But, I’m sure someone out there has made the casual assumption that if you were to go to Egypt and see the pyramids, you might hear some sitar music in the market. Absolutely not. An oud or shawm or a solo singer maybe, but definitely no sitars.

One question I have is, given Mario’s vast popularity, has this strange association rubbed off into other forms of media? Are there movies set in the desert featuring sitars in the soundtrack? Those sorts of musical associations can be hard to separate, especially once made in youth.