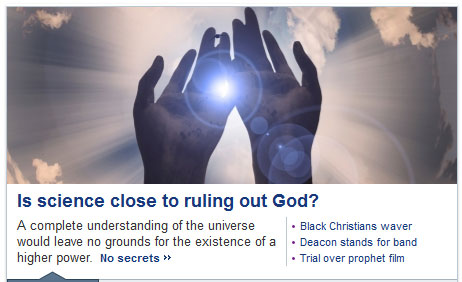 I saw this article on the front page on Yahoo news just a couple of weeks ago. You’ve probably seen things like it before too on the cover of magazines or talked about on TV. This sort of thing comes out all the time. “Is science close to ruling out God?” “A complete understanding of the universe would leave no grounds for the existence of a higher power.” It goes on to talk about how religious thoughts are just certain chemicals reacting in our brains.

Well, IS science close to ruling out God? Well, no, not even close because that’s not the sort of thing science can do. The hearts of men can rule out God, and do – all the time! And they don’t need science to help them out. In fact, science can’t do it. Here is why.

Science can only answer questions about the natural world. It is a certain strict set of tools for combining what we can observe with our senses with rigorous reasoning. It isn’t a tool for metaphysical philosophy but rather a method for discovering how things in the present work. Science can’t explain WHY things work the way they do, only HOW. A doctor can examine a man’s body and say that it appears he died of a heart attack. It cannot say whether the man was a good man or not or whether it’s a good or bad thing that he died. 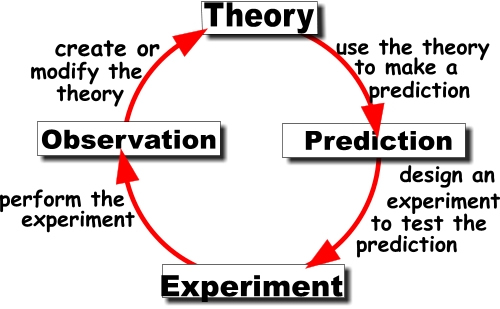 You probably learned about the scientific method in school. You start with a hypothesis about something. That is a suggested idea about how something works. It’s a guess. Then, you have to set up an experiment. A well-designed experiment will be “controlled”, meaning it will test just one idea or prediction at a time. If you try to do too much at once, you risk drawing wrong conclusions about why something did or didn’t work. I don’t work in a laboratory, but I do program computers for a living. This idea of the “smallest testable case” is the key to debugging software. I would be hopelessly lost at work without it.

Once a scientist’s experiment is successful in portraying a certain outcome, the next step is for it to be repeated. You have to do the experiment again and again and get the same results. If you don’t, then something is happening that you don’t understand and you need to go back to the beginning and refine your hypothesis or narrow the scope of your experiment. Another important element is that other scientists need to be able to test out your experiment on their own and come up with the same results. If they don’t, then something about your research is flaky. 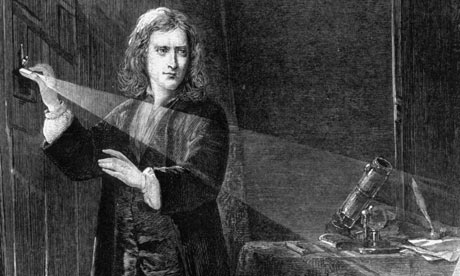 Science is a wonderful tool for discovering all sorts of things in the natural world and thinking clearly through many of the problems we try to solve every day. Isaac Newton, who worked back in the 1600’s, was probably the best guy to ever do all this right. In the process, he figured out an astounding amount of things about calculus, light, gravity and astronomy. He was also a Christian and spent about a third of his time studying the bible, much to the dismay of some scientists who admire him today. Perhaps they should not be so dismayed?

Something people often forget today is that the scientific method is of little use for analyzing history. History is something we don’t have immediate access too. An event in the past happened only once. You can’t repeat it. You can’t observe it first hand to record accurate eyewitness data yourself. Even something as simple as hearing whether the Vandals won their football game yesterday (probably not) is based on hearsay. You can’t set up an experiment to prove it. You can only dig up some evidence and make some informed guesses.

In our age, the prevalence of video has created an illusion in ours minds that if we have a recording of something, then it definitely happened. Even things as far back as WWII seem a lot more undebatable since we have lot of old film footage from then still around.

Except we all know that videos can be fake – not just by what they show, but usually in what is NOT shown. Science can only use what we know about the natural world to say whether something COULD have happened a certain way. Skeptics say the gospel accounts are fake. We can’t “prove” that they aren’t, just like we can’t prove anything else about history. But we can see if what they say makes sense and does a good job of explaining things or not.

Example: The following is from a documentary that discussed the use of staged protest and conflict photos in middle-east journalism.