Let’s pretend for a moment that we are historians (maybe we think we are scientists, but we aren’t really) who want to figure out what happened back in AD 33. Keep in mind that even though the world is full of skeptics today, virtually EVERYONE still admits that SOMETHING crazy happened back then. Nobody doubts the incredible rise and influence of Christianity – our archeology is full of nothing if not old cathedrals, bibles, saints, and kings claiming to rule or fight for Christ. You would be hard pressed today to find even a hardened atheist who thinks that Jesus didn’t exist. We just disagree about who he was. In fact, Buddhists, Muslims, and just about everyone acknowledge that Jesus lived and died and said some pretty interesting things. The catch is that we Christians say he also came back to life because he was the Son of God. That’s the sticking point.

But regardless, SOMETHING happened back then after Jesus was executed. We can use some simple logic to break it down in to pretty short list of possibilities. 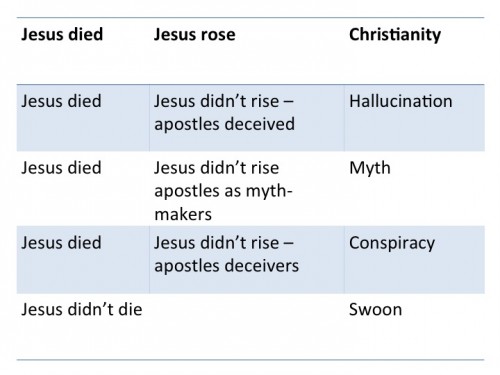 * I discussed the chart above extemporaneously for a while. Brief paraphrase below.

When you look at the lives the apostles and the first 300 years worth of Christians, they would not have risked their lives for something they just fabricated. It goes against every possible thing we know about human motivations. The rise of Christianity is not some special exception of insanity that so many would die for this hope for no earthly gain. That Jesus actually came back to life and was seen profoundly by many people is the best and simplest explanation for all that followed. (I don’t have time to go into great detail on this right now.) 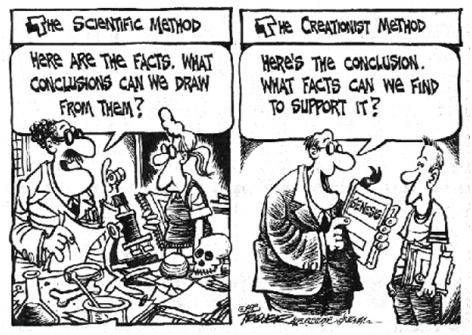 The cartoon above is intended to ridicule Christians. The trouble though is that it assumes the folks in the left image are really starting with a pure clean slate. In fact, they bring just as many constraints to the table as the ones on the right. Before the consideration even begins, “Jesus rose” is crossed out from the list above with a sharpie. We know THAT doesn’t happen. That leaves them only one of the options left and so they look at some of the facts and argue about which one it was. Were the early Christians evil? Or just stupid? That’s about what they have left to pick from, and that is before they even get started. Now the guys on the right have some problems too, especially if they are trying too hard to impress the other side. They can end up making the same mistakes.

Throughout the years, Jesus has been a popular figure. Even amongst secularists, you can’t score many points by bad-mouthing him or his teachings in the west. Because of that, the need for a likable but safe Jesus has been especially necessary in the past century. The middle road, #3 on the list above, serves that purpose nicely.

If you saw the PBS special “From Jesus to Christ” about 2 years ago, then you probably have a pretty good idea what this myth version of Jesus looks like. This is the really popular version of Jesus and Christianity right now in the public square. If you hear a politician talk about Jesus these days, it’s probably going to be the safe myth Jesus, not the disruptive risen Lord. This allows people to still keep Jesus around and pay homage to him and respect him and say nice things about him. That miracle stuff about him coming back from the dead though? Um, didn’t happen. But who cares! Isn’t this stuff great anyway? Now anyone who still insists that he did come back is a dangerous fundy, kind of like those nutty terrorists that take Islam too seriously. The mythical Jesus though is really cool. He’s safe.

Jesus as myth has become the de facto view for secularists in the past 50 years. I think part of why this is is because it fits nicely into the popular sort of “lowest common denominator” baseline spirituality that we have accepted in the west in the past half century. People everywhere are talking about how they are “spiritual”, but not “religious”.

Philosopher Slovaj Zizek (who by the way is definitely NOT a Christian) puts his finger on one reason this is so popular today.

When today’s New Age ideologists insist on the distinction between religion and spirituality (they perceive themselves as spiritual, not part of any organized religion), they (often not so) silently impose a “pure” procedure of Zen-like spiritual meditation as the “whiteness” of religion. The idea is that all religions presuppose, rely on, exploit, manipulate, etc., the same core of mystical experience, and that it is only “pure” forms of meditation like Zen Buddhism that exemplify this core directly, bypassing institutional and dogmatic mediations. Spiritual meditation, in its abstraction from institutionalized religion, appears today as the zero-level undistorted core of religion: the complex institutional and dogmatic edifice which sustains every particular religion is dismissed as a contingent secondary coating of this core. The reason for this shift of accent from religious institution to the intimacy of spiritual experience is that such a meditation is the ideological form that best fits today’s global capitalism.

(I cut the Zizek quote from my sermon, but still wanted to include it here.)

Jesus as myth is really great for mix-n-match spirituality. Just like we get to choose our clothes and the pics on our Facebook pages and the accessories for our iPods, in the hyper-individualist culture of today, we get to choose (and vote with our wallet) what we want to believe about God. It helps if you pick things that sort of make sense as it’s less troubling psychologically but still, it’s up to you. The Jesus whose resurrection is a myth, a fantastical (though good intentioned) story works really well for us “choose your own adventure” types.

The utter and shocking alternative to this is something very tangible and solid that really happened on the ground, not something just in our heads. Positive thinking is great, but that wouldn’t have turned Peter’s life around and it’s not going to turn ours around either. What CAN and WILL turn our lives around is the fact that Jesus came back from the dead, bodily, all on his own, and conquered death, won the victory over sin, and rose up to rule over all of creation.

But in fact Christ has been raised from the dead, the firstfruits of those who have fallen asleep. For as by a man came death, by a man has come also the resurrection of the dead. For as in Adam all die, so also in Christ shall all be made alive. But each in his own order: Christ the firstfruits, then at his coming those who belong to Christ.
(1 Corinthians 15:20-23 ESV)

ALL our hope, not just some of it, is hinged upon his literal, actual, historical resurrection from the grave.

And if Christ has not been raised, your faith is futile and you are still in your sins. Then those also who have fallen asleep in Christ have perished. If in Christ we have hope in this life only, we are of all people most to be pitied.
(1 Corinthians 15:17-19 ESV)