I look around me today and at my own life and I see a lot of fear. I see people are afraid of where our country is going culturally or politically. In a little over a week is our national election. There are a lot of folks very worried about what might happen if the wrong politician comes to power or stays in power. There are people afraid for their children, worried that they may grow up in a land full of people who hate them for believing God. There are people worried about the devaluation of our currency by government banks and financial shenanigans – what if I don’t have any money to give to my children? What if they all end up broke and enslaved to debt? I can relate to that one a bit! Some people are afraid of war or of terrorists. What are the chances there will be another big war? Judging by history, I’d say 100%. Chance that it will come in your children’s lifetime? Pretty good chance.

I really love this old photo from WWII. It’s an image of great hope in the midst of disaster and destruction. The power of the resurrection is like this. 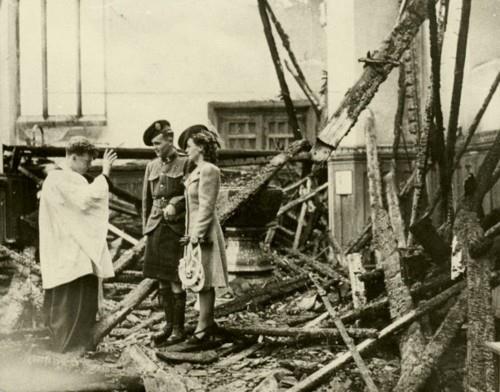 “On 20th April, 1941, the morning after 150 incendiary bombs had gutted St. Bartholomew’s, East Ham a bride and groom arrived at the wrecked church. They found charred timbers and ravaged walls were all that was left of the church where they were to be married that day.

But Helen Fowler, aged 20 of Caledon Road, East Ham and her Canadian soldier sweetheart, Cpl. Christopher Morrison, aged 21 of the 48th Highlanders stood proudly amid the ruins of the bombed-out church and made their wedding vows, while fireman played their hoses on the wooden beams which were still smouldering.”

Other people are afraid of things closer to home. Do you remember being in junior high and just being terrified about what other people thought of you? I know there are men in here very worried about what their wives think of them, and vice versa. We’ve let people down. We’ve screwed up. We’ve been hurt for real. Maybe we are still getting hurt by these same people almost every day. All of these things are little pieces of death chipping away at our lives. Being a better person (however you propose to do that) won’t make this go away. We are still being killed a little bit each day.

Jesus teaches us though that his resurrection is just the beginning. He is the first fruits of those raised to eternal life. His is the model. We are his children, who are growing up to be just like Him. He conquered death – for us. So that though we still die, we will be raised just like him. This isn’t something that just happens way later when the end of the world has come. Look at Peter and how he went from a scared poser to being a confident and passionate man who lived for God until the Emperor Nero crucified him upside-down just to get him to shut up. Our own lives will likely not look so dramatic or public – each of us is unique. Still, the power of Christ’s resurrection began RIGHT AWAY. It changes our lives today, right now. Jesus is not alive way up and heaven, leaving us out in the cold down here on earth. Just like in the Old Testament, he has “pitched his tent” so to speak right here in our midst.

I want to end from this passage from New Testament scholar N.T. Wright:

The earliest Christians, to speak of Jesus’ resurrection was to speak of something that, however (in our sense) earth-shattering, however much it drew together things earthly and heavenly, was still an ‘earthly’ event, and needed to be exactly that. It had earthly consequences: an empty tomb, footprints by the shore, and, at Emmaus, a loaf broken but not consumed.

No wonder the Herods, the Caesars and the Sadducees of this world, ancient and modern, were and are eager to rule out all possibility of actual resurrection. They are, after all, staking a counter-claim on the real world. It is the real world that the tyrants and bullies (including intellectual and cultural tyrants and bullies) try to rule by force, only to discover that in order to do so they have to squash all rumors of resurrection, rumours that would imply that their greatest weapons, death and deconstruction, are not after all omnipotent.

Father God, grant us courage. Let the power of the resurrection of your only son overcome the fear in our hearts. Thank you for doing all of this for us all on your own. Though we don’t deserve any of it, you have continued to give us the very best gifts. Help us to open our eyes and see them unwrapped before us. Strengthen our faith and cast away our doubts. And even if they persist, we know you will not let us down. Thank you Jesus. Amen.