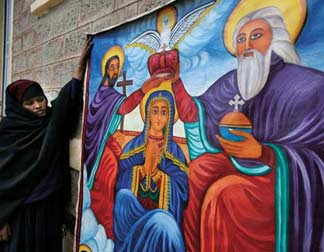 In reading several chapters of a book on Ethiopian art, I was intrigued by the story of Adamu Tesfaw (b. 1922), a priest turned painter. He came from a family of rural craftsmen – his father was a painter and his brother a sculptor. He studied to be a priest and then also had an arranged marriage to a local girl as a young man. After four years, mostly abroad though, he discovered his wife had been unfaithful. (Perhaps because he was never around?!) So he reluctantly divorced her, but this means his career as a priest was over. He moved to the capital to paint, remarried and had 7 children, 4 of which died young. His work can be seen in churches all over Ethiopia. His style is like that of the ancient icon painters, but with some contemporary inventions of his own. In looking through a collection of them, I especially liked how he carefully how he uses the pupils of the eyes of his figures to add meaning (and occasionally mystery) to the scenes. It seems that he largely made his modest living by painting scenes commissioned by rich Italian tourists.

The author of the book, who befriended the artist and arranged to have his works displayed in a western gallery tour was very interested in the form of the works and the stylistic history. When Adamu was asked to pick seven pieces to send to the museum though, he surprised the organizer by picking what he considered to be the most important religious scenes he had depicted – many of which the author considered rather unremarkable compared to much of his other work. Different criteria indeed!