I am trying out my new shakey skills with Ge’ez script here. Since I don’t know enough Amharic yet, it will be in transliterated English! 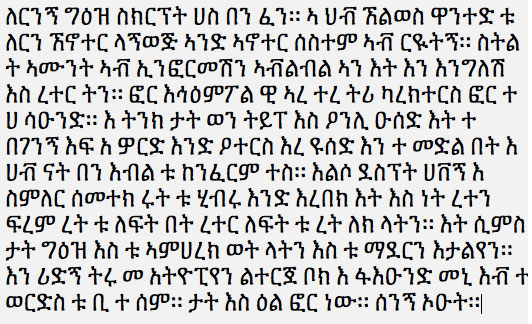 Transliteration: Learning Ge’ez script has been fun. I have always wanted to learn another language and another system of writing. Still, the amount of information available on it in English is rather thin. For example, why are there three characters for the ‘h’ sound? I think that one type is only used at the beginning of a word and others are used in the middle, but I have not been able to confirm this. Also, despite having a similar Semetic root to Hebrew and Arabic, it is not written from right to left but rather left to right just like Latin. It seems that Ge’ez is to Amharic what Latin is to modern Italian. In reading through my Ethiopian liturgy book, I found many of the words to be the same. That is all for now. Signing out!