One of the things my wife and I immediately noticed when we visited Ethiopia last year was how tightly integrated everyone’s daily lives where. Everyone worked all day, every day, but it wasn’t what we would call “work” in the west. The cook at our guest house was there 24/7 but on an average day would only spend a couple hours in the kitchen. The rest of the time was spent talking with friends, reading, playing games, or watching dubbed Arabic soap operas. The guard was there 24/7 too, but he wasn’t expected to do anything except open the gate a few times a day. He spent much of the day studying an English textbook. Our driver made about $5.00 a day whether he drove us around non-stop for fourteen hours or just picked us up for one quick trip. Where was he the rest of the time? Swinging by to talk with his mother, visiting some friends at a nearby shop, fixing another car in the garage. What ev’. The social worker at our orphanage often worked late, but was sometimes gone for long stretches during the day doing… not sure. None of this was strange there. 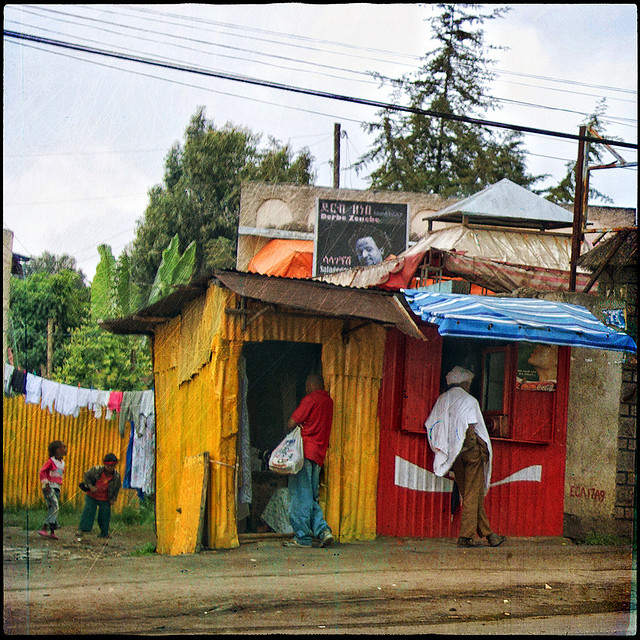 Everywhere we went, men and women worked outside the home, but they often had their children with them. Women kept shop while their toddlers played on the floor. Men worked construction or in offices from early in the morning to late in the evening, but took frequent breaks to have coffee with friends. Everyone was working all the time, but as far as I could tell, they were rarely paid by the hour. Their work was highly entangled with their family life. Leisure time and labor time overlapped. You worked with friends and hung out with friends and it wasn’t often clear when one started and another stopped. From what I understand, this is largely the norm for much of Africa, although it manifests itself a bit differently in every culture.

Mains describes some of this in his book:

From an Ethiopian perspective, the absurdity of the Western contrast between work and leisure is that it divides activities into the categories of productive and nonproductive without regard for their implications for constructing social relationships. The concept of surplus labor presumes that labor may be quantified in terms of time and categorized as necessary or surplus. In the Ethiopian case, work is not always conceived of in this manner. In urban Ethiopia, working positions one within relations of power and exchange in a manner that produces identity. This work may last two hours or eight, and the implications for identity are the same. One IS a shoeshine or one IS a teacher. In Ethiopia the government working is the paragon of this dynamic. The government worker receives a salary that depends not on the number of days or hours worked, but on his position. He is thought not to produce, but to mediate between individuals. .

He goes on to explain several ways these social relationships are key to this way of life functioning. For example, everywhere along busy streets there are vendors selling produce, repairing bicycles, etc. Technically they are all squatters and not allowed by the government, but they actually serve an important function for the shop owners they set up in front of. They provide security and also allow the shop owner to duck out for an hour to go to church or run an errand. In exchange, the shop keeper chases the police off if they give the street vendor trouble. To maintain their loyalty, both will often buy coffee or small meals for each other from day-to-day too.

I think about how different most of these jobs are to mine. I work for the State government here and I must work exactly 2080 hours every calendar year. Not one hour more and not one hour less. The money is all allocated a year ahead of time. We punch time cards. We are either 100% percent working, sit down, shut up, work, no personal calls. OR we are off. Don’t work. Don’t even answer your email ’cause we can’t pay you overtime. Go play. NOW. Play hard. OK. Now come back to the office. Ready, set, work! Don’t mix work and family, etc. Don’t talk about politics at work. That’s the rule. Also, don’t talk about work at home, it’s top secret.

It’s so compartmentalized here in the west and the attitude bleeds over into some strange beliefs, such as the fact that extremely hard-working homeschooling stay-at-home moms are considered “unemployed” and in some circles ridiculed for their “lack of productivity”. Hogwash. It’s more likely that the guy in the office is the one producing absolutely nothing, but he does technically get paid for it. At least, that’s what his W-2 tax form says so it must be true.

It seems that Africans tend look at all this with great puzzlement. After spending some time there, it makes me a bit puzzled too.