When you name something, you declare that you own it. You name your children and they take that name and use it and affirm your declaration. You may name your house, or your horse, or your musical instrument as well. You are not just describing the thing in question, but personalizing it, claiming it, connecting it to yourself.

In Genesis 1:27 we see God create man and women. They have no names at this point. In the next chapter, we find that God has named his special single child Adam. In 2:22, the woman is made from Adam’s rib. Adam describes who she is (“She shall be called Woman for she was taken out of Man.”), but she is still nameless at this point. Meanwhile Adam names all the living creatures. The Lord brings them to Adam to see what he will call them. Creation is given to the dominion of the man and the woman. Throughout Genesis 3, Adam is Adam, but the woman is just the woman. Then in verses 16-19, God pronounces his terrible curse on the man and the woman.

The very first thing Adam does in verse 20 after the curse is to name the woman Eve. That is the first occurrence. She is now the possession of Adam. And Eve lets this happens. She loves him, even as she hates him. They are estranged from God and from each other but the connections to both their creator and their spouse are of the impossibly deep kind that can never be loosed. She will always be lonely without him and utterly lonely without her creator. In his flailing and grasping and failing, Adam will reach to create a meaningful existence for himself. He will build cities and empires. He will oppress Eve along the way, but then he will love Eve. He has to.

Naming Eve is a curse that can’t be wholly undone before the fullnes of all redemption. The body is baptized, but it has been owned and cursed with desire after the husband. This needs bodily resurrection to be properly reset. 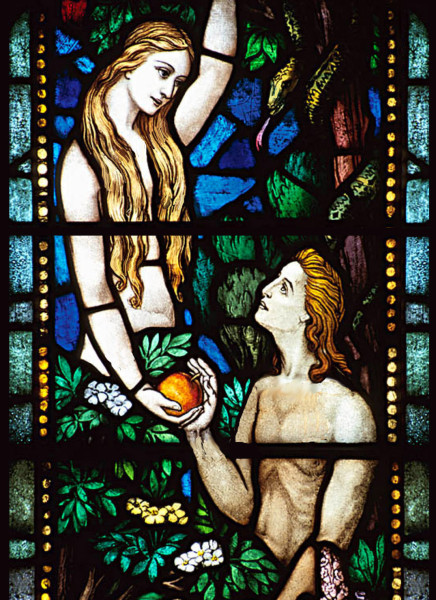 As I write this I’m listening to a slow and high violin solo. I can’t help but draw things together.

The violinist plays ever so gently the harmonic tone, exactly in the middle of the string. What makes it sound so mysterious? It can’t quite decide if it is the octave below or the one above. It is never wholly the one or the other. Your mind tries to attach to it and file it away, to properly name it. That is what Adam does. He names everything he sees and hears. But when he hears the harmonic, he stops and listens a little longer. Finally, in a distracted fog, missing the next few notes, he gives it a name, but even then he doubts. Perhaps it has another name. Can something be two things at once? Even so, it is like unto himself. He named Eve as an other, but sometimes she is so much Adam, just taking up a slightly different space. His own existence and nature of creation is a mystery. So mysteries like unto his own are just slightly disturbing as they remind him of his own origin and his own incompleteness.

This is why, in the new Jerusalem, we are neither married nor given in marriage. For the redemption of our split of being is not to be found in the wedding of couples. That is a substitution image for now, but when there is no need for the light of the sun or the moon (Revelation 21:23), there will no longer be a need for that union as well. The redemption Chrisy aims to bring does not unify this difference like a “better” marriage, but dissolves it for something entirely better. That is why those who make a great fuss about gender, be it professors of “women’s studies” or patriarchs lording it over their wives and daughters, are not actually participating in the healing of mankind. To emphasize our differences is honest, but it is to live in the past and the present. The love of Christ pushes us into the future, where no daughter is given in marriage. In the same way, women’s societies that revel in their independent professionalism, their desert of equal rights, or even their breast feeding, are asserting things that cannot heal the rift. This is equally true of men on elder boards that fail to listen to their wives. They aren’t healing anything either.

What is the reason that Christ’s ministry on earth not exhibit a sexual element? He is the firstborn of the new creation. He needs no sexual union, no husband-wife relationship, to fully express his humanity. This is extremely telling, is it not? It was not good for Adam to be alone, so then Eve. But the second Adam had no Eve, and yet was not alone. To do the will of his father was his bread and oxygen. When we are raised on last day, we will see him, and when we see him we shall be like him (1 John 3:2). Our union with Christ will supersede our substitute unions to the daughters of Eve in the meantime. Women will be truly free then – free from the name Adam gave to them, free from their desire for him – and able to properly give and receive love from their creator. They will be unbroken. Depression and weakness will be things of the past. The same is true for all the sons of Adam. They will be made new – unbroken and non-depleting. Their ambition for false things will finally dry up for all ages. In the vision in Revelation 3, Christ gives us a new name. Eve gets a new one too, this time not from Adam but from her maker.

(Thanks to Fr. Thomas McKenzie for mentioning the naming of Eve after the curse in a recent lecture. I had not made the connection before. I think this whole line of reasoning could be developed a lot further than I have briefly done here. Why? I am attempting to resolve some of the tension between complementarianism and egalitarianism. I affirm the natural just tuning of the hierarchy while also pushing back and saying it is not an eternal institution but a temporary and fundamentally broken one. To redeem all creation is to gradually see the distinctions blur as both the man and woman are image bearers of the same.)