This post is a sort of continuation of yesterday’s Eliminating the sliding scale of love.

“Not many of you should become teachers, my brothers, for you know that we who teach will be judged with greater strictness.” James 3:1

“With great power comes great responsibility.” – Uncle Ben, in many variations of the Spider Man comic and related movies although Voltaire said something just like it in French a lot earlier.

Two warnings here – one from scripture and one from popular culture that seem, at first glance to be saying the same thing. What does power, responsibility, education increase? Supposedly it increases the possibility of us committing sins of omission. The more you know, the more you SHOULD be doing. The weight of the burden increases to match the relative size and strength of your muscles. Lets take a look at how this can play out. 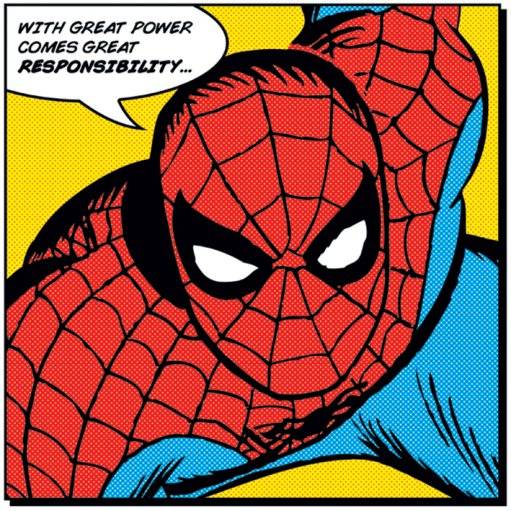 If you are a bumpkin, then expectations are low and you are easily forgiven. We imagine we are being graceful when we quickly forgive illiterate people in rural Zambia or Peru for their ignorance. But if you are smart, then you have no excuse for your actions. You have a Ph.D. and went to college for eight years? You aren’t off the hook! How dare you do something stupid! You should know better.

Do you make $20k a year and live in an old trailer? Well hey, it’s totally fine that you couldn’t scrape together $100 to buy a plate at the crisis pregnancy center fundraising dinner. But that guy over there – he makes six figures and lives in a McMansion! He has no excuse. If he’s a Christian (as he says he is), why doesn’t he sell that damn Land Rover and get a cheaper car? He could have given all that money to the poor! He’s got power and money and with that comes more responsibility. AmIRight?

The teacher is held to a higher standard than the students. They have a problem with their marriage? That’s bad. The pastor has a problem with his? Super bad! Let’s follow James’s advice and be extra strict with him. He needs to get his act together, and while he’s at it he could get off his lazy butt and come up with some better sermons. He has a seminary degree after all – isn’t he supposed to be the smartest guy in the room? Also, since he is the pastor and is holier than the rest of us, he should be doing even more to serve the body of Christ. I called him up last weekend to ask if he could help us move into our new apartment and he said he couldn’t because he was going to a baseball game with his son. What a poser! With all that power comes great responsibility. He doesn’t get to go to baseball games like average people. He will be judged with greater strictness, so says the apostles. Doesn’t he know this? Doesn’t he read the bible? Doesn’t he like Spiderman? I will pray that he gets his act together and that the Holy Spirit protects him from burnout. Hmmm, in fact the last four pastors we have had all quit due to burnout. I wonder what their problem was? Oh well.

Conservative politicians have always wanted to set up welfare programs this way. It’s wise and biblical, right? Poor people have to carefully document how poor they really are and that they haven’t smoked too much weed lately to qualify for aid. You have to be declared special to get the bar lowered. On the flip side, liberal politicians make sure the tax code is set up to thoroughly inventory the rich so a much larger chunk of their wealth can be confiscated by the state each year. With a great fat wallet comes great responsibility. And we are pretty sure you aren’t responsible so we are just going to put that money to noble use whether you feel up to it not. If Spiderman won’t fight his own demons, then we’ll MAKE him do it. It’s in everyone’s best interest of course.

Think about how much the topic of birth order is discussed with regards to parenting. How come first-born children have all this extra stress on them? It drives them to greater things – true, but it also sometimes drives them to snap. They are being held subject to the same crushing force.

The problem is that I don’t think this force is Christian. I don’t think it’s something Jesus pressures us with. I don’t think the Kingdom of God is set up to work like this. I don’t think St. James and the guy from Spiderman (or Voltaire) are actually saying the same thing. Martin Luther was so frustrated with people thinking that they WOULD think that that he wanted to have James thrown out just to keep things safe. But I think we can keep James as long as we read the whole bible, especially the gospels.

First of all, we need to differentiate between soteriology and orthopraxy. Whether God loves you or not, whether Jesus died for you or not, is not something where the more capable humans among us are “judged with greater strictness”. The judge on the throne is the Lord and he declares us righteous by proxy (the work of Jesus) – not by any evidence, good or ill, presented on our behalf.

On the other hand, whatever our hands find to do, we should do it with all our might. (Ecclesiastes 9:10). What this looks like will vary for each person, whether they are faithful in it or not. We are different functioning parts of the body. (1 Corinthians 12:210). Our roles are not uniform or freely interchangeable. There is a list of standards for elders or teachers in the church, age being only an implicit requirement. And this doesn’t mean that God is breathing down these people’s necks, putting a heavier burden on them than everyone else like a boss trying to wring the most out of his highest paid employees. Again, that is how we in the world lord it over each other. It is not so in the Kingdom of God.

The world puts the best people up on a pedestal so that we may worship them one day and then throw tomatoes at them the next. Their position is so fragile due to the ridiculous expectations. We loved to love Lance Armstrong and then we loved to hate him. We swooned over Mel Gibson and then delighted in throwing him out for bad behavior. Bill Gates is a responsible rich guy because he spends his money fighting malaria. Larry Ellison is an evil rich guy because he spends his money on fast sail boats. This is how we judge everyone.

Where this goes especially south is when we put Christian leaders up on the pedestal. We buy their books and watch their TV shows and hang on their every word. And then we curse them and burn them in effigy when their moral failings come to light. They have greater responsibility, yes, but then we amplify the situation 100x larger than the man or women themselves can handle and hold them up to an impossible height. Who can stand? The ones who appear to do so are just faking it.

The greatest in the Kingdom of Heaven are the servants of all. They may hold a high office, but on the ground what that looks like is that they work tirelessly behind the scenes and only a relatively small circle of folks in their local community is really that aware of all they do. Then they are free and it is left to God to judge the work of their life. He may give them a crown some day or he may say their work was more like hay and stubble (1 Corinthians 3). But when the verdict is coming from the one you know to be a loving Father, how fearful need you be? That is what Jesus means when he says his burden is light. It is not the burden of the world – of the crowd. Even the Father’s strictness is still light compared to that.