There are several cars in my town that carry the bumper sticker pictured below – “When religion ruled the world, they called it the Dark Ages” it says. It’s a popular sentiment and one frequently found in high school textbooks, but one that is not taken at all seriously by the bulk of serious historians, be they religious or otherwise. Several people have thoroughly debunked the myth of the dark ages though one of my favorite pieces on it is by David Bently Hart in his book from a few years ago – Atheist Delusions: The Christian Revolution and Its Fashionable Enemies. 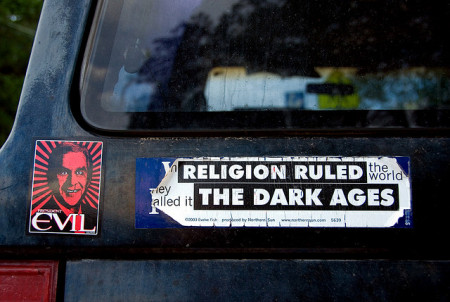 Along with the secular history of the “dark” ages, is also an eschatology of sorts. It is their hope for the age to come. The prophecy for the future tells of a world where religion fades into obscurity and impotency as science, technology, and rational thinking gloriously dominate the minds and hearts of the people. This alleged story is still told today despite the fact that huge swaths of the world’s population are more religious than ever before.

James K.A. Smith explains this false prediction in a 2008 essay titled Secularity, Globalization, and the Re-enchantment of the World.

According to this sociological predictive thesis, the gradual but steady growth of modern Enlightenment will roll back the superstition and mythology associated with religion. Agents who participate in the market that yields iPods and jet aircraft couldn’t possibly cling to the magical world of religious belief. Progress in modernity would be the progress of rationalization, Weber suggested, which would mean a radical “dis-enchantment of the world” and thus a secularization of society.

The secularization thesis, however, has fallen on hard times. The prophetic prognostications of [Max] Weber and his ilk proved to be only the predictions of false prophets – with the interesting exception of Europe (though even that exception is contested). The reevaluation and reassessment of the confidence placed in the secularization thesis has yielded a need to revise accounts of the relationship between the globalization of capitalism and technology, on the one hand, and religion on the other. What was expected to be the triumphant march of demythologizing modernity – exporting the mechanism of scientific rationality, technological progress, and economic growth – rolling back the superstition of religious belief has not come to pass. Instead, we have seen the mechanisms of religious belief appropriating and taking up the fruit of modernity (televangelist global TV networks, Al-Qaeda Web sites, industries of religious marketing) for un- and antimodern ends. But in this respect, one could wonder just who is appropriating whom: is it that the forces of religious belief are beating modernity with its own tool – akin to David slaying Goliath with Goliath’s own sword? Or is it the case that the market and modernity are subtly winning this contents, transforming “religion” into a commodity that is commensurate with globalized capitalism? Has the “religion” that has perdured into late modernity become merely the chaplain of the forces of globalization, marshaled for exercises in foreign policy that are primarily interested in the expansion of freedom in the form of free markets? If the only religion that survives modernity is a religion wholly commensurate with and subservient to the market, might we – for the sake of religion – hope for a little MORE secularization? If these are the only gods left to us, might we not – even as the faithful – hope for another Nietzschaen announcement of the death of such gods? (p.5)

I’ve sat under the teaching of Christian psychologists who insisted that appropriating some of the most useful ideas articulated by Freud was analogous to “plundering the Egyptians”. I don’t disagree with this notion actually, but it does raise a question on the back of it: How much of the fruit of secular modernity can you fill your faithful life with before it begins to be another thing entirely? AND, if this went on gradually for generations, would you even be able to TELL that it was happening?

So this is the challenge for us who desire to be faithful to God. Though I speak from the standpoint of an Evangelical Christian, I see this equally being the situation for fellow Catholics as well as Muslims, Jews, and some Buddhists. We reject secular modernity with our left hand – its nihilistic anthropology and non-ethics – while with our right hand swiftly adopting global capitalism and a myriad of dubious medical technology.

We are pulling ourselves in multiple directions and it is difficult to stay oriented. Our leaders argue about these things but are able to come to little consensus when their own lives are so shaped and entangled by them. It is challenging to come up with proper examples in my own imagination, which is disconcerting to me. I will give just one example.

We religious conservatives like to affirm how extremely valuable and central family relations are – committed strong and kind fathers, nurturing mothers, the comradery of sisters, etc. How good and pleasant it is for brothers (both biological and otherwise!) to dwell together in unity. (Psalm 133:1) Hooray for family! Then we purchase multiple automobiles for ourselves and help each one of our children buy a car before they are even adults. We try to get them into colleges thousands of miles away where they will meet and marry strangers and deliver their babies in a lonely hospital a world away. Maybe if they are lucky their new local church will organize to bring them some meals for a week and a box of diapers, as if that will patch things up. Everyone is busy working hard to pay for their cars and fill them with gas. We’re all dressed up but there is nowhere to go within range of the weekend. Skype video chat is nice, but will only do so much to connect you to someone you’ve ejected from your orbit with a rocket. Are we sure we know what we are doing?

We think we are pretty good at picking and choosing what fruits of modernity are good and wholesome and actually blessings from God and rejecting the fruits that are rebellious and demonic. I am not so sure. I think sometimes can discern these things, and sometimes we are seriously duped and make a lot of mistakes. Our parents and grandparents did and we still are. These things deserve more contemplation and prayer than we generally give them.