In Luke chapter 1, Gabriel announces two upcoming miraculous conceptions – first to Zacharias and then to Mary.

Both of them are a bit incredulous at first and reply with a question. 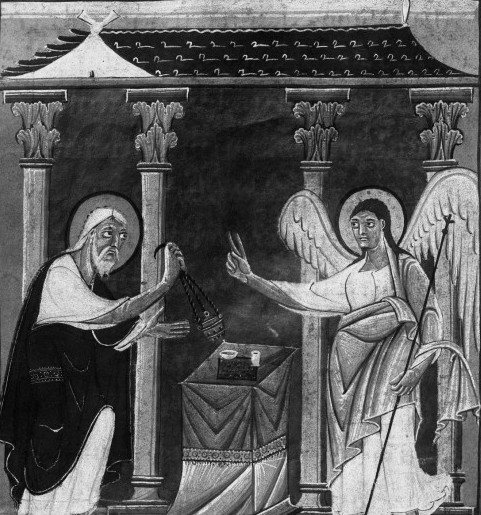 Mary says, “How can this be, since I do not know a man?” In reply she gets a legitimate answer to her question. “The Holy Spirit will come upon you, and the power of the Highest will overshadow you.”

Zacharias, on the other hand, says, “How shall I know this? For I am an old man, and my wife is well advanced in years.” Sounds like a good enough question really, and in the same format as Mary’s – Really? How? (Gives a reason why not).

Gabriel doesn’t think so though. He flips out and says something like, “I stand in the very presence of God and have been sent to tell you this, but you didn’t believe me. Are you crazy or somethin’? For that, you will not be permitted to speak for about 10 months. See ya.”

Why the difference? Is it something beyond the words, something not communicated on the page? Perhaps Gabriel could read their minds and tell that Mary (despite her questioning) had a simple underlying faith and that Zacharias had underlying doubt in need of rebuke. But Aquinas says angels can’t read minds and he’s probably right. Besides, they don’t need telepathy to do their jobs. They deliver messages to men. The two-way interaction is pretty limited.

Well maybe it wasn’t mind reading then. Perhaps it was body language or other “halo data”. Perhaps something in Zacharias’s tone of voice annoyed him. Moral of the story: Don’t talk back to angels. But that’s not the story and it doesn’t have a moral, so scratch that.

Maybe there was more to the conversation that wasn’t recorded. Perhaps Zach expressed his doubt more forcefully, but Luke (who is recounting the story not just second-hand but third-hand at least) condensed the conversation into two sentences. I’ll buy that. But the way that scripture has been kept intact by the Holy Spirit over the ages means that every word counts and that every missing word is not particularly important. So though I do not believe in the particular late modern Evangelical doctrine of “inerrancy”, I believe that everything in the gospel accounts is completely true and sufficient as-is. A greater (missing) context is not required to get all (not just some) of the important points. So the account of this interaction according to Luke is good enough.

But that still leaves us stuck. Why the rebuke to Zacharias and not to Mary? All I can figure is that the audience mattered. Mary was a teenage girl in a blue-collar family. Zacharias was an elderly priest. It was (literally) his job to know the word of God and to serve in the temple for the worship of Yahweh. Not only that, but it had been his job for many years – his whole life. It would have also been the job of his father and grandfather since he was from the tribe of Levi. He should know better.

The Pharisees often came from the priestly class. We aren’t told if Zacharias was sympathetic with the Pharisee sect, though it’s at least likely. Perhaps he was associated with the Essenes, another renewal movement of sorts. They cared a lot about God too. The old testament prophets usually came from the priestly class as well. They were used to spending time in (or at lest near) the presence of God and were more cut out to being his mouthpiece. Zacharias is of the same ilk and so Gabriel naturally expected a little more from him than from a young girl.

And so Zacharias the priest was “judged more strictly” for his initial unbelief. But in the end this doesn’t change a thing. God’s grace, his gift, is coming like a freight train into both their lives, whether they react to it properly or not. Mary got Jesus, and a good husband later that year. Zacharias and Elizabeth still received their new son John just the same. And that is a comforting thought for us who also sometimes do not believe.