I don’t have a proper conversion experience to point to when I reflect on my own history – not the kind to make contemporary revivalist evangelicals happy anyway. I prayed some sort of prayer of repentance and acknowledgement of Christ when I was five years old. I remember praying with my father one evening before bed, but I don’t remember much else. When I was about fourteen and questioning, I remember asking God to give me a sign (I know, I know, this is forbidden, right?) but I immediately looked up and saw three shooting stars in the sky in quick succession. That has always made me smile. I’ve never doubted that was an answer.

There was never a time when I did not have some sort of faith in the Triune God as my creator, and Jesus as redeemer. But the world is a terribly broken and confusing place and for some theology only serves to further muddle it. For me though, and for others who think along these lines, it can serve to console. That is why we study it, even if obliquely.

The right explanation can help heal a mind distressed beyond endurance by events whose significance it cannot grasp.

With this in mind, I might ask, what exposure to theological ideas have been the most profoundly influential to me? I’m 31 now. Perhaps this list will be different when I am 62. I suspect that it will only be longer. I will attempt to enumerate them as an exercise in reflection.

1. I grew up hearing bible stories and sermons told several times a week from infancy. The starting point for all of these was always a piece of scripture. Subjects like “logic” and “rhetoric” were utterly foreign in the schools I attended, both public and private. This was also the case in the schools my own parents attended as well, so such “clear thinking” techniques were only a distant rumor to me. So when, somewhere around the age of 12, I was given C.S. Lewis’s Mere Christianity, it was as if someone shone a 1000 watt spotlight in my face. Here was someone articulating (in ridiculously tight prose) classic Christian reasons for, first just generic theism, and then finally for the special uniqueness of Christ. I know it’s a popular work, but at the time I had never been exposed to something so formal before. As a late adolescent with a thousand voices screaming for my future allegiance, someone giving a calm and steady apologia for why all that stuff I had learned about God was actually pretty legit made a very lasting impression in how I thought about nearly everything afterward.

2. Though I believe I am a Christian because God himself has laid out the way for me to follow and caused my feet to walk in that way, from an outside perspective, I’ve often told people that one of the main reasons I am a follower today can be traced back to a handful of highly influential summer camps. These were the camps up in the woods with chapel twice a day for an entire week with games of capture the flag every night. I was in a room of about 150 kids singing Shine Jesus Shine about a hundred times along with an overhead projector and one college guy with a guitar. Cold showers. Foosball. Making new friends, some of them even girls (which was unprecedented for this awkward teen), and being surrounded by young adults who talked incessantly about Jesus, scripture, and missionary work rather than girlfriends, cars, and the NBA playoffs, was like living on another planet – a better planet. Andrew Jones once asked, “Why does summer camp have to end?” in a post he wrote advocating new monastic communities. Alas, it did have to end, but it was not to be taken lightly and the memory remains.

3. My freshman year of college, I joined a young and energetic congregation. I remember one early weekend, before much homework had been assigned and before I got the memo that I was supposed to actually be at some church work party (sigh), I stole away to a cafe and sat down to read my bible. I ended up reading all of the Gospel of John in one shot. I remember reading all the red letters off the page and my body shaking as with electricity. Never before had the scriptures seemed so alive, it was if they were moments away from biting my fingers. That day it became tremendously obvious to me that there was no person in all human history more important than Jesus Christ – not even close. I haven’t changed my position on that. I don’t think this sort of thing generally happens reading other books. It’s like magic.

4. My second year into college, I was introduced to the work of Larry Crabb through a class offered at church. Digging deeper past the provided materials and handouts, I discovered his rather groundbreaking work of Christian psychology called Inside Out. Though I would recommend that to anyone as a first read, it was actually a later books of his, with the incredibly generic and somewhat misleading title ‘Finding God’ that really had a profound effect on me. Crabb presents a cognitive analysis of desire, frustration, anger, and love that is substantially different from other psychological positions on sin within evangelicism. Though I didn’t know it at the time, his work actually provides a legitimate gospel-infused blueprint for unilateral love. This stuff has, probably more than any teaching or piece of pastoral advice I’ve ever received, helped me to find a way forward when my thoughts have been very, very dark.

5. Several friends I met along the way after college recommended that G.K. Chesteron’s Orthodoxy was worth reading. This is where growing up baptist really has it’s disadvantages – Roman Catholic authors are forbidden and their works absent from libraries, shops, and pastor’s bookshelves. What a shame. I tell people that Orthodoxy is kind of like Mere Christianity on crack. In it, I was first seriously introduced to the idea that the ‘boring’ world we know in our day-to-day lives is actually enchanted and crazier than our Modern minds can imagine. Reading it, especially the second time, made me excited to be alive, excited to be a Christian, and even excited to study theology. Ha! People who have drank the Chesterton kool-aid often get a lot of mileage out it, and for good reason.

5. Robert Capon, Robert Webber and Thomas Merton via Michael Spencer. In a season of life when I felt weighed down by health problems, money problems, multiple screaming babies, and no church congregation as the previous one had been largely emptied of friends and mentors, I turned to the wild and sketchy internet for some answers or at least company. To my delight, what I found was the blog of Michael Spencer, the ‘Internet Monk’, a reluctant baptist minister working his way through many of the same “post-evangelical” theological and ecclesiastical difficulties that I was grappling with. His many writings and podcasts were what kept me hoping and stable through several very difficult years. I speak with no hyperbole when I say that I owe him a great debt both for his work and his friendship, though we only conversed via email on a few occasions. Sadly, Michael died suddenly of cancer three years ago. Along the way he introduced me to the three authors I’ve mentioned above. They formed the basis of much of his approach to spiritual formation, along with the Gospel of Mark.

6. Things Hidden Since the Foundation of the World, Rene Girard. Despite my differences with some of the thought of Doug Wilson, I have to give him credit for introducing me to Girard’s work through a series of blog posts years ago. (Ironically, I don’t think Wilson has near as much use for Girard anymore.) On a whim I decided to dive in and read Girard’s key work from the late 197os – Things Hidden. What I found was a crazy theory about human culture. The thing is, once you get used to it, you start to see it everywhere. Everyone thinks their philosophy explains stuff the best, but it turns out that 9 times out of 10, Girard’s theory does a better job of accounting for the mystery of war, hate, desire, religion, and, well, you name it. And at the very center of his work, is Jesus. He is the corner stone, the stumbling block that the whole human race trips over and falls upside-down into the future. Alright, so that’s nice, it tickled my brain, but has it changed my life? I think so. It’s given me peace in a post-9/11 world where confrontation with Islam sometimes seems like a terrifying possibility. It has helped me to both dismiss politicians and world leaders and also forgive them. It’s significantly helped me to not get tripped up on the issue of theodicy (why does God allow evil to happen?) and therefore to deepen my trust in Him. It’s helped me to not worry about the future and to more easily ignore naysayers. So God bless Girard and his helpful disciples such as Gil Baile, James Alison, and Jean-Michel Oughourlian. I little bit of right explanation goes a long way toward healing. 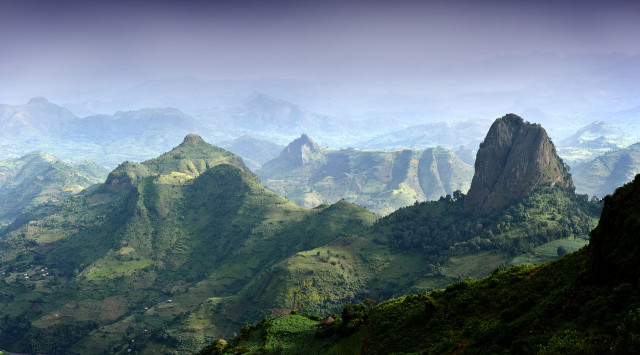 7. Two years ago, I visited Ethiopia for a week while in the process of adopting my forth child. Prior to that, I had never even been outside of North America. I heard stories told of Africa my enter life, but nothing could really prepare me for the actual experience. To recount them would probably sound cliche. I’ve written about them plenty elsewhere on this blog. Things have never really been the same since I came home. I feel a connection to the people I met as my brothers and sisters, more than I sometimes feel to my own neighbors. It seems more like home than my own pacific northwest U.S. where nearly nobody fears God. Their poverty is not as deep as ours. Many people report similar experience on short-term mission trips and whatnot. I used to poo-poo them. It’s actually really popular to deride these experiences lately, and the kind of criticism presented in books like When Helping Hurts should be seriously considered. Still, I have to say that visiting Africa is impossible to forget. I may not get to go back, but I would really like to.

8. What’s next? My children are growing up. My wife and I are growing older. Those things mean more than anything I’ve mentioned above, but they are highly personal. I can’t share those things much with you, the reader. I’ve only given you an account of the lesser, potentially transferable things. God uses things like this to ‘convert’ us to slightly different people, whether we are able to articulate what happened or not. I suspect I left out at least twice as many formative events as I have listed. No matter. What does the future hold? More challenges and more surprises – wonderful and terrible. My trust resides in the same one as before.