I’d like to move on now to another point Paul brings up in our passage from today:

8 Already you have all you want! Already you have become rich! Without us you have become kings! And would that you did reign, so that we might share the rule with you! 9 For I think that God has exhibited us apostles as last of all, like men sentenced to death, because we have become a spectacle to the world, to angels, and to men. 10 We are fools for Christ’s sake, but you are wise in Christ. We are weak, but you are strong. You are held in honor, but we in disrepute. 11 To the present hour we hunger and thirst, we are poorly dressed and buffeted and homeless, 12 and we labor, working with our own hands. When reviled, we bless; when persecuted, we endure; 13 when slandered, we entreat. We have become, and are still, like the scum of the world, the refuse of all things.

What Paul is talking about here has another immediate parallel in parenthood. Mothers and fathers have do a ton of hard work behind the scenes to make things stable for their children. The kids, especially little kids, are often oblivious of this. They get up in the morning and have a fridge full of food to eat and a closet full of clean clothes to wear. They play in a warm house or go to school and learn a bunch of new things with their friends. They don’t see the part where mom and dad stayed up until 12:00 the night before doing laundry, washing dishes, and fixing the toilet. They don’t realize that mom made about 15 different phone calls during the week to arrange rides for them, to talk to their teacher about trouble with their homework, and get a hold of the right kind of asthma medication for their little brother. They are only vaguely aware that dad has been getting up at 5:00 AM every day to work overtime and pay off extra medical bills. They are just bumbling through childhood. Eventually as they mature they become more aware that all this is happening on the back channel.

The same is true for church communities. You may not realize this, but your pastors do a lot of work to keep everything glued together. Now, I can legitimately draw attention to this fact because I’m not one of your pastors. Ha! I’m a member of this congregation, of this community and I get to help out with music and occasionally even preaching on a Sunday morning. But I’m not a pastor. I’m not an elder. Kim, and Loren, and Luke are, and to some degree there is also Kirk, Nick, Martin, Bret, and Geoff. Eh, who are these people anyway? Who cares? Well, that’s actually the usual attitude about these things. Being a parent can be a rather thankless job at times and being a pastor is the same way. 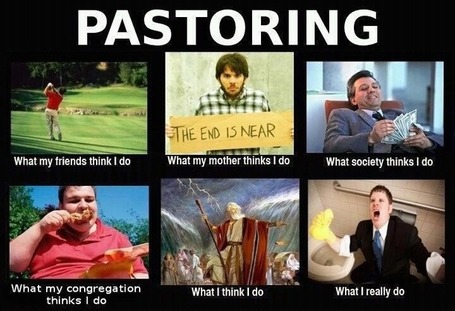 In the modern west, especially in America, who is given the most respect and honor? The guy or gal that makes the most money! Turn on the TV, who do see? Mark Zuckerberg, Bill Gates, Warren Buffet, LeBron James, George Clooney. They’ve got the mad skills to bring in the bucks and live like kings. If you read the news much at all, I’m sure you’ve seen an article or chart like this before: 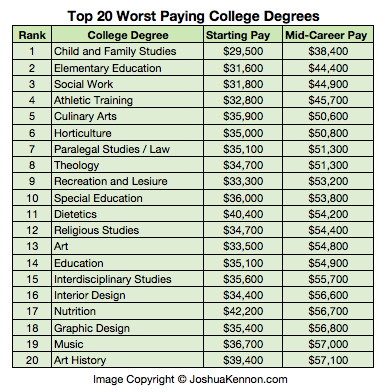 Pastors aren’t dumb. Most of them are well aware of this going into it. It’s easy to make fun of a handful of celebrity pastors out there who have TV shows and big book deals. They don’t really count. They are just anomalies. Real pastors, who spend their time shepherding the people – nobody has ever heard of any of them except for a few of the people in their own home towns.

That was actually the case for the apostles too. We look at Saint Paul now and say, “Wow, he wrote half the New Testament!” But while he was alive, most people thought he was just a chump. He was always getting run out of town because people didn’t like his preaching. He was treated with suspicion by some of the Christians in Jerusalem because of his shady past. Even people in the churches he planted wouldn’t listen to him half the time. And then later in life he ended up shipwrecked, under house arrest, and then executed. It’s only hundreds of years later that we looked at what he wrote in his letter to the Romans and said, “He really understood what Jesus did for us and did an amazing job explaining it. Wow.” At the time, he was, as he describes in his letter, reviled like the scum of the world. And so were the other apostles too.

Your pastors here are nobody famous, but they care about you a lot. They agonize over you, and pray for you all the time. When you are having a rotten time, you are on their mind more than you realize. They do some of what you see up here on a Sunday, but they do a lot of counseling behind the scenes – talking people out of getting a divorce or sometimes even committing suicide, helping them get out of debt, break destructive habits, and maybe even fixing their water heater. They do teaching, planning, helping and giving supplies to people in need, and yes, even cleaning the toilets. I remember coming here late in the evening last year to set up something for worship practice and Kim and Eva were running around like crazy planting flowers and mowing the lawn. I mean, we try to have volunteers to that stuff, but if it doesn’t happen, where does the buck stop? With the pastor, and for a lot of things you don’t see, that’s where it stops.

The benefit is that many things are taken care of for you. These worship services are going on here every Sunday whether you can make it or not and whether you sing along or not. And if you’re in trouble, there are people you can ask for help and they really will. They’ve made it their job. Crazy, right? A bunch of fools – for Christ’s sake.

In many parts of the world, being a pastor is not just thankless and worth little money, but also dangerous. This past month has seen many pastors and clergy in Egypt and Syria kidnapped and even murdered. They were just doing their jobs, but nothing drives people crazy like saying Jesus is actually God. In China, to be a pastor means you need to keep your activities way on the down low or you’ll find yourself in prison. Here in America, pastors are just slandered in the press as being bigots or homophobes, or whatever the scapegoat of the week happens to be. Sure it’s a drag, but fortunately it’s relatively safe. You all get to live quietly as a Christian while they get most of the hate mail.