A couple of years ago I picked up a copy of Celtic Daily Prayer, a great book of daily prayers and readings published by the Northumbia Community. When my copy arrived in the mail (purchased used on Amazon), I removed the dust jacket and discovered the outside had been attacked with a Sharpie. The inside too had some warnings in place. 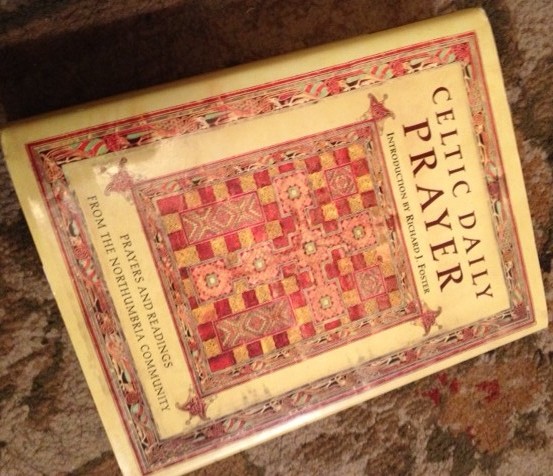 Apparently the previous owner felt it necessary to warn future owners of the danger of abandoning scripture in favor of, well, preselected scripture and liturgical prayers. They also are apparently not too keen on the NRSV, which apparently was devised by the sons of Cain, or perhaps a “serpent Jew”.

I share this just because I think it’s kind of funny and because as a book lover, it’s fun to find hidden treasures left by previous owners.

This made me think though – what a relatively recent idea to warn people not to fall back on liturgical prayers. My children just studied Gutenberg in their history lessons. Before his time, nearly 1500 years after the time of Christ, very few people on earth had access to a bible for use in personal devotions. What did they fall back on? Liturgical prayers and scraps of the best memorized passages – exactly the sort of thing you find in a prayer book like this. Oh such a step backward to return to their unenlightened ways! I’m not so convinced. It sounds too much like the “dark ages” myth all over again. Recently, I have been encouraged by using a prayer book for daily devotions rather than raw scripture reading, which is very hit and miss. Of course I still study the bible – for all kinds of things, but it’s been helpful to be shown another way to pray and meditate. The constraint is a comfort.