Here, Leithart legitimately wonders, “Where are the fish cherubim?”. Israel is a nation of land-lubbers and later the gospel goes to the sea-based gentiles. As the day of the Lord draws near though, we see reversals. Behold my amateur ad hoc attempt to interact with this idea:

Jesus walks on the water as if it were ground, and Peter yearns to do so too, though he falters. Jesus also causes fish to all but leap into Peter’s boat, bring them onto his “floating land-gardens”. A storm shipwrecks Paul – seemingly certain death, but instead not one sailor or passenger is lost. For old Israel, the depths of the ocean are to be feared (see many of the psalms), but for Jesus and the new Christians, they are a highway to be tread for the spread of the gospel, rather than a deadly barrier. Over the Atlantic it comes to Ireland before any could walk across France.

On all the seas, what more is to be feared than old Leviathan? Yet we are told his head is crushed and his body given to be food for the land-dwellers (Psalm 74:14). We could not draw him out with a hook (Job 41:1), but it turns out we don’t need to because our Lord has subdued him and calmed our anxieties. So much so that Saint Brendan even camped out on something like the old monster, now a toothless servant to it’s maker.

It seems that perhaps the waters were another constraint that had to be cast down to bring salvation to all mankind. Jesus demolished the requirement for the chosen people to be of the blood of Abraham. Then Peter is shown that “unclean” food is no obstacle, as well as circumcision. Pentecost blows any claim to a special language out of the water. Then the subjection of the sea is brought out of our fears and into our imaginations. Even though the motivations of Columbus were greatly tainted, he was nonetheless following in a long tradition of spreading the Word outward from Jerusalem to the ends of the earth in an adventuresome fashion. 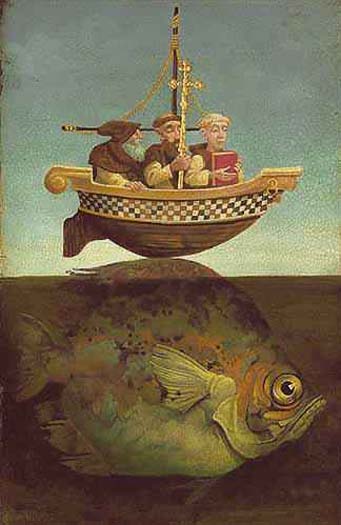