Now early in the morning He came again into the temple, and all the people came to Him; and He sat down and taught them. Then the scribes and Pharisees brought to Him a woman caught in adultery. And when they had set her in the midst, they said to Him, “Teacher, this woman was caught in adultery, in the very act. Now Moses, in the law, commanded us that such should be stoned. But what do You say?” This they said, testing Him, that they might have something of which to accuse Him. But Jesus stooped down and wrote on the ground with His finger, as though He did not hear.

So when they continued asking Him, He raised Himself up and said to them, “He who is without sin among you, let him throw a stone at her first.” And again He stooped down and wrote on the ground. Then those who heard it, being convicted by their conscience, went out one by one, beginning with the oldest even to the last. And Jesus was left alone, and the woman standing in the midst. When Jesus had raised Himself up and saw no one but the woman, He said to her, “Woman, where are those accusers of yours? Has no one condemned you?”

And Jesus said to her, “Neither do I condemn you; go and sin no more.”

OK, so look what happens at the end. That the woman is a sinner – that she has screwed up badly is completely obvious to everyone. Jesus knows this too. He knows her sin. And though the words aren’t recorded here exactly, he forgives her. He says, effectively, “It’s all good. Go on your way. By the way, don’t sin anymore.”

Notice what doesn’t happen in the story. Well, maybe it happened in some fashion, but it’s not important enough for Saint John the Divine to mention it. What doesn’t happen? She doesn’t ask for forgiveness.

She doesn’t throw herself at Jesus’s feet and beg for forgiveness. She doesn’t say she’s sorry. She’s on the ground because the crowd is ready to execute her, but that’s all. For all we know, she might have snuck away and been meeting up with her wayward lover only later that very day. Is she all fixed up now? Was she a righteous person when she came to Jesus? No, definitely not. Was she a righteous person when she left? Not really. Maybe she went on to make some better decisions, but who cares? She’s the same person. Her life is a mess. It’s been a mess, it was a mess, and it was still kind of a mess. And what does Jesus, the creator of all things say to her? “I don’t condemn you”. Was she righteous? No, HE was righteous. End of story.

1500 years earlier, God made a covenant with Abraham. But when it came time for Abraham to walk through the blood of all the sacrificed animals, God caused him to fall into a sleep (Genesis 15). He remains faithful whether we do or not (and we don’t). But his love for us is not dependent on anything in our domain. It does not have qualifications. It is unilateral. He asks for our input, but then he just loves us regardless of what our input is.

By any measurement, the woman caught in adultery was condemned, but the God of the universe did, by his own singular will, not condemn her. And by this act, she was set free. Today, the modern secular world attempts to deliver an evangelion. It tries to be the good news for people trapped in darkness. It tries to say to the woman caught in adultery, “Hey, what you were doing is not wrong. You are free to express yourself however you feel you need to. Your body is yours to do absolutely anything with. It’s beautiful. Your choices, every last one of them, are fabulous. Just listen to your heart and know you are total awesome sauce!” It knows that what the world needs is a gospel, and so it gives them one – a gospel of antinomianism – no rules, “imagine no religion”, etc. “This is what will set you free” it boldly proclaims.

But it doesn’t work. Our heart is attuned to the subatomic rhythms of the universe even when we explain them away with our minds. There is light and there is darkness. There is beauty and there is real ugliness. There is right and there is wrong. And we are wallowing in the wrong, each in our own way. Painting the darkness with a layer of white paint and celebrating looks wonderful, for a grand total of five whole minutes. But our heart knows otherwise.

Our Lord and Savior on the other hand, doesn’t bother with the can of paint. He calls a spade a spade. He NAMES thing as they truly are. He knows that we are broken, busted, fallen, depraved, and wicked. But then he says: “I don’t condemn you. I put you to sleep when it’s your turn to walk through the blood. I walk through it for you. You don’t vocalize your desire for forgiveness in a nice clean-cut way? Well, I’m going to forgive you anyway. Here you go. I don’t condemn you. I love you. Go and sin no more. See you ’round!”

So what else is there to say about all this? Rejoice! You have a savior. 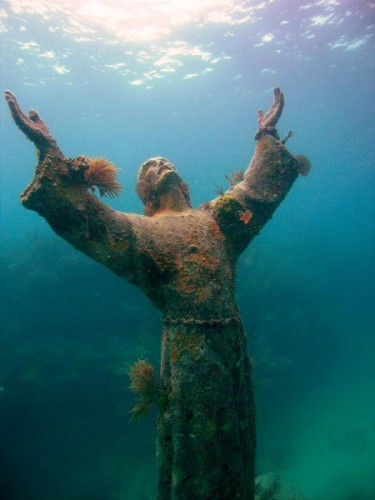 (Disclosure: Reading Brennan Manning’s treatment of John 8 is what caused me to write this reflection.)