This is the indication given for the psalm – number 67 in this case. “On stringed instruments”. The Lord gave us voices, and those are the most natural instruments of all. The Lord gave us arms and hands and that is why every nation and every tongue has always had drums of some sort, even if they just beat two rocks together, it was man’s glory to do so. But stringed instruments take time and care to build. They take special wood and resonators. Even a primitive one is more complicated that a piece of furniture. The strings themselves are now made of steel or nylon, but then it would have been the guts of animals – killed and carefully extracted, cut to length and precariously tuned. If there is anything the ancient stringed musician would have done differently than those of today, it is that he would have played carefully so as not to put his instrument drastically out of tune every two minutes. We can wail on our cryogenic poly-coated nickel wires. He could not. How would one achieve volume then? The same way an orchestra does – with many players. Witness the Ethiopian Christians marching here during Timkat (epiphany). 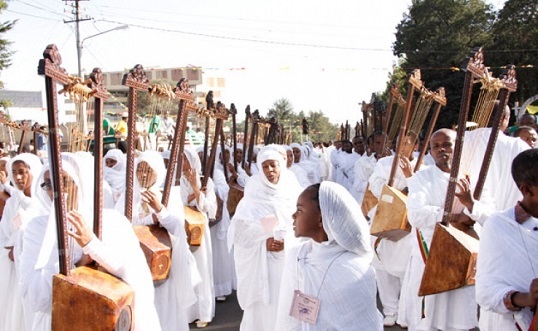 A stringed instrument is a cultivated thing, an artifact requiring a lot of time to make and much skill to play well. If anyone has a high view of scripture and it’s inspired writing and preservation, he should marvel that this indication has been well-kept. You are supposed to sing this praise song to God WHILE playing a harp or lute. Seriously. That wasn’t added later by someone trying to spice things up. It was there at it’s conception and the first time it was sung in the temple of Mt. Zion while David still reigned as king.

When the Lion of Judah returns to earth, will he find a people who have been taught to despise guitars? I think he will find more than a few. Their love of the voice will likely more than make up for things I suppose, but what a shame. “Oh, but those darn stringed instruments have been used and abused for more twisted and terrible ends than you could imagine as of late! Did you watch the last music video awards show?” True, true. Now quit making excuses and get back to work. Find a way to redeem them! Is the Spirit of Life not up for the job? Figure it out! All you who are keen to reform worship, I give you a challenging but worthwhile task: find a place for the stringed instruments. Locking them out and keeping just the keyboard is punting. The Lord is worthy of praise with these things as well.