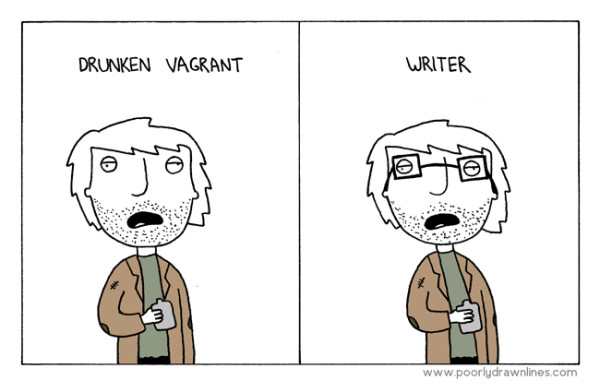 I must admit that I’m suspicious of professional writers. That is, people whose writing is their primary source of income. This could be journalists or occasionally pastors and some academics. Often they are very skilled writers since they have so much focused practice. BUT, their motive, their drive for the work gets in the way of their subject. The HAVE to write just to pay the rent or enable themselves or their wife to go to the grocery store each week and so write they do, about… well you name it. They pontificate about everything, and this isn’t always good, regardless of how clever they are.

A few examples: Conservative blogger Matt Walsh received national attention about a year ago for some well-written commentary on some political issue. (I confess, I don’t even remember now what it was.) But that lasted for one, maybe two days. Then, to keep the revenue flowing (and the bills paid), he had to write something fresh and new over again to draw in just as much traffic. Rinse and repeat 2-3 times a week, 52 weeks a year. Despite some apparent talent, Walsh is relatively young, inexperienced, and not particularly well-read. The result? Tons of stupid and misguided incendiary op-ed pieces. There is evidence that the guy is capable of writing well , but becoming a professional writer has put him into the position where he will only write crap most of the time.

Rod Dreher is another (and far better) example. I have enjoyed a lot of his work in The American Conservative and other publications over the past few years. I certainly disagree with him about a variety of things, but I definitely respect him. Recently though, a commentor on one of his articles mentioned that his new book on “The Benedict Option” and the pieces surrounding it, feel almost identical to his book “Crunchy Cons” and the promo surrounding IT a decade ago. This draws attention to the fact that, at the end of the day, to keep bread on the table, Rod has got to keep on writing a steady stream of seemingly interesting stuff, or be out on the street applying to work at the local Amazon packing warehouse. Does this shape what he says and how he says it? I’m afraid so, and not always for the best. As much as someone like Dreher would eschew tabloid journalism, I suspect his daily deadlines might lead him to have more in common with them than he would wish.

On the other side of the political spectrum, I have similar feelings about Nicholas Kristof. He’ll write something excellent on Tuesday, followed by something ridiculously daft on Thursday. Is the guy stupid? No, but he HAD to bang out 5000 words for the Times on both days and if he failed to do so, he would have had to field nasty phone calls and threats from his boss. The result? Definitely not always good writing or thinking.

The same can be said of the academic who HAS to publish to be eligible for tenure. It’s motivating yes, but like a barbed whip. Inspiring? Not exactly. Sure, Beethoven was paid to write what became some of his best works, but if he had a “project manager” breathing down his neck and waving a contract or paycheck in front of him each month, do you think he could have penned the Missa Solemnis? Doubtful.

I’m not saying that writing by these folks is bad or always tainted. Certainly it can be very good. But on reflection, much of my favorite works are things that did not NEED to be written. Merton was a monk. All he HAD to do was show up for prayer at the designated time with the other brothers and get his allotted chores done. But in the meantime he wrote about 20 books, many of which are fantastic. Nobody forced N.T. Wright to put together the manuscript for Jesus and the Victory of God – it’s like it just exploded out of him, in addition to the journal articles he was writing to keep up his credentials. Leithart writes about all kinds of things, not because he’s making piles of cash for his works (often published by houses like Wipf and Stock that only print runs of 100 at a time), but because it’s a discipline and a joy – so much good thinking, and sourced from a desire to learn and explore the world, not from the threat of poverty or the petty competition of university colleagues.

I guess that’s why some of the very best things I have ever read have been blog posts by amateurs. They most certainly did not “need” to be written, but they were, and to great effect. Let’s all keep it up – even when it seems to get buried in noise on the net.