When [Jesus] appeared to Peter and his companions, He said to them, “Take hold of me; touch me, and see that I am no bodiless phantom’. And they touched Him then and there, and believed, for they had had contact with the flesh-and-blood reality of Him. That was how they came by their contempt for death, and proved themselves superior to it.”
Ignatius’ Epistle to the Smyrnaeans (~130 AD), Ch. 3

As much as we try to ignore it, we are all deeply terrified by death. All philosophers and poets have known this. Scientists try to reduce it to meaninglessness with the usual hand-waving but they all know this doesn’t really work. But something happened that gave a small group of men (and women) the actual ability (not just the “courage”), to truly give death the middle finger and carry on with life in a way previously unknown to mankind. What was it? Touching the flesh-and-blood resurrected Christ Jesus.

Death hit this guy full tilt boogie and what happened to him? Nothin’. He’s back and looking better than ever and promising matter-of-factly that he’ll wake the rest of us up in the same way. On paper the apostles were part of a tiny fringe backwater Jewish sect. Not too many years later, the worship of their risen leader would dominate and shape all of Western civilization. How was such a thing possible? Their contempt for death.

It was 1994. Tom Petty’s Wildflowers album was on the radio. I was a young teen in my bedroom trying to hack out “You Wreck Me” on my first cheap electric guitar. It didn’t take long before I had the notes figured out – there are only three chords for most of the song after all, but this only led to a deep sinking realization that producing anything that sounded even distantly like what appeared on the album was a complete lost cause. Yes, I was playing the notes for the D – A – E in the correct rhythm, but I might as well have been on another planet. I doubt someone familiar with the song would even have been able to discern what I was attempting. The lead sheet music I was working from was entirely accurate and yet it had betrayed me. Bafflingly, it conveyed almost zero information needed to reproduce the canonical music.

Why was that? What was I missing? It was such a contrast to the Telemann sonata sheet music that I was preparing on my trumpet at the same time. It seemingly contained everything I needed to know. At the time, I was at least vaguely aware that despite it being a “guitar driven” rock song, the guitar just really didn’t play that much. There was a lot of space where the drums were really prominent. There was the singing of course, but I could hear that in my head even if I wasn’t confident enough to release the words into the atmosphere at the time. Still, was that all that was missing?

Every music teacher I had criticized pop music for it’s extreme simplicity. Three chords, three and a half minutes long, a melody with less than an octave range and juvenile poetry for text. What a joke! Now lets get back to work rehearsing this amazing fugue by J.S. Bach. It was only when I got to college and sat under the sagacious Mr. Bukvich, that it was announced we would spent the entire first year studying Bach exclusively… because the Beatles were far TOO complicated to discuss constructively. It turns out this is true, but only from the standpoint of harmonic function. It threw me off the scent of what was really going on, and of finding an understanding of my earlier frustrations.

What is really going on is that contemporary pop music is transmitted via the medium of recordings. Duh, right? But it makes all the difference. These recordings, except in unusual cases where some kind of raw unrehearsed performance is captured, are carefully crafted in studios over many months and combine hundreds of takes and sonic experimentation plus weeks of mixing after that. Pop music is extremely complex and interesting, but not in the same way old classical music is. The material being manipulated is timbre, not harmony. A brilliant 5-part counterpoint is not on the menu, but a meticulously crafted tone is. The notes on the page look brain-dead simple, but then there is the miking of the high-hat, the slight amount of distortion on the guitar just after the attack, the almost imperceptible synth mixed with the bass line, and the vocalist finding just the right amount of over-singing to give the chorus increased emotional intensity. Changing all these things to the delight of the musicians is where all the action is. And almost none of these things can be communicated well, if at all, via traditional sheet music.

They are both music, but interest is found in manipulating almost entirely different variables. Criticizing one or the other as being inferior is like a sculptor of marble mocking a painter for his ridiculous 2-dimensional creations, while the painter shakes his head at the fact that every piece the sculptor produces is plain grey.

I was reminded of this over the weekend when pulled out Tom Petty’s Wildflowers. I hadn’t listened to it in many years. This time through the album though, I was astounded – all I could hear was the piano. How could I have not noticed it there before? I know what a piano sounds like for cryin’ out loud! But no, this piano is EQed all funny so it’s only there in the low mids and it’s been compressed so there is almost no attack sound, just the following thickness. Not only that, but on “You Wreck Me”, it’s playing in unison with the guitar in exactly the same range. “Hmmm, that’s odd. Nobody does that. Wait. Nobody would do that by accident.” Indeed. The guitar and piano have been carefully played and recorded and mixed to sound as one single instrument. I don’t think I would have noticed it if I hadn’t listened to so many hours of Lunasa playing in unison combinations to change the timbre over the past decade. I am absolutely certain I never noticed it as a young man. It turns out that maybe what I really needed all those years ago wasn’t a cooler guitar, but a piano, albeit one wrapped in about eight layers of blankets.

Of course, this brings me back to church worship music. You may have seen this cartoon or something like it and heard mountains of criticism from both sides: 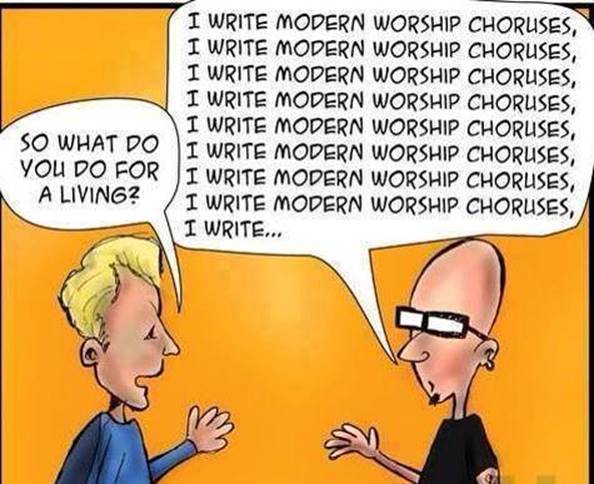 One church sings songs with harmonies composed by Thomas Tallis, William Byrd, or Palestrina. The passing tones trading off between the voices are truly beautiful and enthralling. But the timbre is never altered – unamplified voices singing mezzo forte with a single piano doubling the voice parts every Sunday for decades and even centuries without end. Another congregation sings a praise chorus with 4 chords and only the melody is sung, but the timbre is messed with a lot. It starts quiet, the women come in on the second verse, the bass plays louder and the piano drops out the third time through. The leader calls for a time of prayer and reflection and there is no singing during pass five and six. The percussionist uses the crash cymbals (which he hasn’t otherwise touched all day) during the last time through the chorus. The musical interest in the first case is found in the complex harmony and the denseness of the text. In the other case, the interest is found in the quality of the sound and it’s changing over time.

Musicians delight in these things – in how these forces combine and interact. Participants and listeners delight in these things as well. Dorothy Sayer’s reminds us that when we are told that man was made in God’s image, at that point in scripture, the only thing we know about God is that he creates things. Apparently he really likes to create things. So do we. I don’t think either of the kinds of music mentioned above make him sad. It’s only we who are annoyed by one kind or the other (or by something in between) when done poorly.

Frankly, I love both of these kinds of music. I frequently miss the years of singing in choir and hope I can someday participate in that form again. But for now, it’s mostly guitars so it’s time to keep on figuring out how to make that sound beautiful too. The possibilities are rich for everyone.