I haven’t had this significant of a lull in writing since I began in early 2007. The reason is that I have been preparing for a trip later this autumn to Ethiopia. I’m been practicing Ethiopian Amharic pretty regularly for the past two months. My wife has been a great help. We’ve learned the bulk of the Fidel/Ge’ez script and are up to somewhere close to 600 words. I’ve also learned quite a bit more basic grammar this time around. I still feel completely useless though and terribly slow. But no matter – it’s time to just keep pushing through. I believe it’s entirely worth it.

Why am I traveling? Many reasons. First of all, I’ll be looking up the immediate and extended family of my adopted daughter. I know close to where they are located and am enlisting some help to find them. I hope to give them pictures of their daughter (they last saw her over four years ago) and just talk to them a lot and learn as much as I can of her history. I’ll be showing them some videos and also recording some to bring back home. My daughter is still too young to visit, but I hope to take her back there in a few more years, along with maybe the entire family.

I’ll also be visiting a boy we have been sponsoring in one of the orphanages there for several years. We met him on our last trip and though he isn’t open for adoption, my wife and I both desired in our hearts to do something to support him directly. I’ll try to meet him casually without giving him any reason to become attached and also inquire into some of his persisting medical issues. I haven’t been able to make much headway on that from afar.

I’ll also be scouting around a bunch looking for future volunteer service opportunities for if my wife or the whole family if we were to come here short or long-term. I’ll be visiting a couple of different schools for the blind and talking with some other teachers and missionaries in the area. I’ve discovered that virtually none of what I need to know can be discovered by surfing the internet or via email. I’m just going to have to go there myself to learn about what’s happing first-hand. That will help us get the information we need to decide in what capacity to go back in the future. This could be anywhere on the spectrum of “visit as tourists for a week” to “move the whole family there for 2 years”. It could also be soon or far in the future. I have no idea. I am hoping that the Holy Spirit makes it obvious what we should do.

While I’m there, I’ll also be looking up a few people that I can talk to about the state of Christianity there as I find it (and it’s contrast with the secular west) completely fascinating. I’d love to talk to someone at a protestant seminary, as well as an Orthodox clergyman. I’ve been slowly making contacts. I’ll also be visiting a couple of people that helped us out with our adoption and an acquaintance at a tech incubator in the capital. I don’t think I’ll end up doing any of the typical tourist things except drink a lot of coffee! With any luck my Amharic skills will be at least slightly useful. Fortunately, Ethiopians are not at all snooty about feregi (white foreigners) trying to speak their language. Whew! 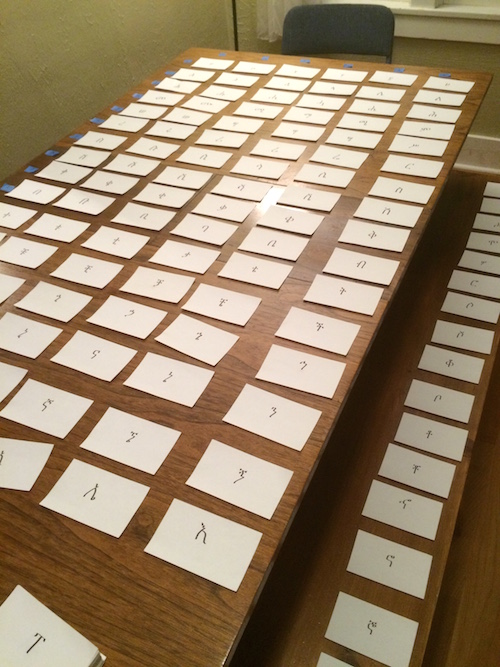 I also hope to journal a lot about my time there. Hey, it worked last time! In the meantime though, I probably won’t be putting much down into words. Even my sermons at church as of late have been delivered from shorter notes and I’ve skipped the labour of materializing them as a series of blog posts. My to-read pile is backed up beyond my mortal ability to catch up with it. But maybe that can be a good thing.