As part of learning to speak and read Amharic this year, I’ve been translating familiar passages from scripture. I recently went through psalm 23 and was struck by how in verse 2 when the Lord “maketh me to lie down in green pastures”, the word used there instead of “green” is (transliterated) “lemlem”, meaning verdant or full of life. Well of course – the good shepherd’s pastures are not just any old fields of grass, but particularly lush and healthy ones. But why should this be news?

Because for me, and as I suspect for perhaps some others in the modern world, “green” is strictly a color and nothing more. Now the word for “green” in many languages still caries this memory of growing things. In Spanish the word is “verde” with the same root as our “verdant”. I figure that when the scribes working under King James back in the 17th century decided to use the word “green” in English, it still retained that lush meaning for them and their immediate readers.

But no longer. For those of us who were raised around computers and on a steady diet of science curriculum, “green” has little to do with life and everything to do with optics. I remember entering RGB (red, green, blue) pixel values by hand on the computer when I was young and using some kind of paint software. When I hear the word “green”, in my mind’s eye I see a color wheel or selector like this: 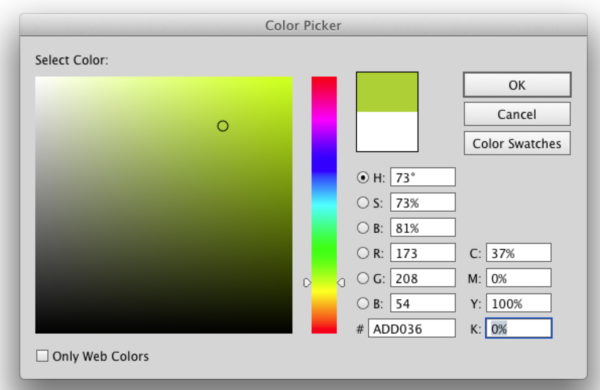 Chlorophyll is green and emeralds are green and eyes can be green and Gatorade is (hopefully) green, but green is not necessarily chlorophylly or emeraldy. Now, when you begin to modify the word and say things like “Kerry green” (my wife’s favorite color), or “forest green”, or “neon green”, “sea green”, or even “grass stain green”, then it comes to life with all kinds of additional meaning, but in the 21st century, in the West at least, the memory of it’s former life seems to be somewhat faded.

That is why, as many qualities as the KJV and their kin have, they end up staying the same while the meanings of their words among the common people changes. Even if you have been deeply educated in its reading, the halo of meaning and memory that surrounds the words in your mind is very different than what people had in their imaginations in previous centuries. In addition, you are probably the least qualified person in the room to articulate what those differences in shades of meaning might be.

Finally, that is why we simultaneously can still benefit from new translations, and the study of the original languages.