I recently returned from my 2nd trip to Ethiopia. The first time was when I traveled with my wife to adopt my youngest daughter almost exactly five years earlier. I’ve had a lot of people ask me about my trip and I’ve found it to be a bit difficult to explain as it doesn’t fit neatly into categories for reasons people typically travel.

It wasn’t really a vacation. I visited almost zero tourist destinations while I was there and didn’t stay anywhere fancy. Very little relaxation happened. On the other hand, it was very refreshing and interesting and exciting – as much as I could ever hope for from a vacation.

It wasn’t really a mission trip. It wasn’t organized by a church or other aid organization and I didn’t petition anyone for money. On the other hand, several people DID donate money for a significant amount of specialized supplies and I did spend most of my days there supporting (or rather learning how to support) two different indigenous Christian aid organizations.

It was a personal/family trip. I wanted to find as much of my adopted daughter’s family and extended family as I reasonably could. I wanted to give them pictures and gifts and tell them how she was doing and also learn as much as I could about her family history. When people would ask why I was going, this is what I would tell them, even though this ultimately consumed only two of the twelve days I was there, mostly due to a lot of prep work ahead of time.

It was an exploratory trip. I have read probably 20 books about Ethiopia since visiting there 5 years ago, but I wanted to experience it again first-hand and figure out what I was missing. In particular, I wanted to learn what it would be like to move the family and live there for a while – not just visit. Would that be feasible or not? Learning things is deeply satisfying in itself and the trip turned out to be a lot more interesting than surfing the internet for esoteric information. I met a lot of people that could help me answer these questions and made some new friends, which is what I was hoping for.

My American friends asked why I didn’t take the entire family. The answer is that I would love to, but I think it would be a lot more enjoyable for them (and less exhausting for my wife and I) if they were a few years older than they are now. The other big reason is that six round-trip airplane tickets would alone cost nearly $8000 and I don’t have that kind of money laying around. My wife and my oldest daughter spent two weeks in South Africa with friends last year, so this trip was sort of “my turn”.

My Ethiopian friends there asked why I didn’t at least bring my wife with me. This is the sort of question that demonstrates the classic divide between western and African ways of thinking about time and family. Many of them live in compounds with a host of extended family nearby. There are also numerous household servants close at hand, even among relatively poor families. There are always lots of people around to keep an eye on the kids. In America? Nada. Mom and Dad are pretty much the entire show. Grandparents, aunts, and uncles often live many hours or even days of travel away. Even one evening away from the children can require complicated babysitter coordination and cost the equivalent of a month’s wages in their currency. Leaving your employer for more than few days can be downright impossible, depending on where you work. Praise God that that particular hurdle could finally be cleared this time as my current employer and coworkers are fabulous and accommodating. We in America may be very rich, but it comes at a great cost. We pay the price in stress and disconnected relationships and we often don’t even know where to begin to heal these rifts. Incidentally, this is another reason I wanted to visit and observe life there up close – to possibly learn a clue or two toward this kind of healing.

So was the trip a success? Absolutely. Although I didn’t get all of my questions answered, I discovered a lot of things I didn’t even know existed. I guess that made it a real adventure – the unpredictability.

I got to meet several of my daughter’s relatives and I learned many things about her ethnicity and culture and history. I didn’t get to meet everyone I wanted to, partly due to the restricted travel – the police were strictly enforcing a 6:00 PM curfew in the town where some of the family lived and none of my friends or helpers I recruited were keen to drive there. Still, all the gifts and pictures made it to the people who were my daughter’s early (though temporary) caregivers.

I got to preach (with a translator) at a Christian worship service of mostly blind people. I also got to sing for them there and later at what turned out to be a very long and very charismatic prayer meeting. I got to visit a special school for the blind whose existence is only the most vaporous of rumours on the internet. I got to quietly give gifts nearly everywhere I went and got something even better in return – to listen to people’s stories and see part of their “normal” day-to-day life up close. The staff of the guest house I stayed at were especially friendly and invited me to their humble lunches and low-key coffee ceremonies throughout the day. Those were some of the best times. Though virtually all social media was blocked on the internet in Ethiopia (Facebook, Twitter, Instagram, Viber, etc.) I was still able to send a receive email with little interruption. This allowed me to regularly share pictures and talk with my wife back home. The only tragedy was losing my passport – prompting a rather frantic trip to the U.S. Embassy where everything was fixed in far less time than I deserve. 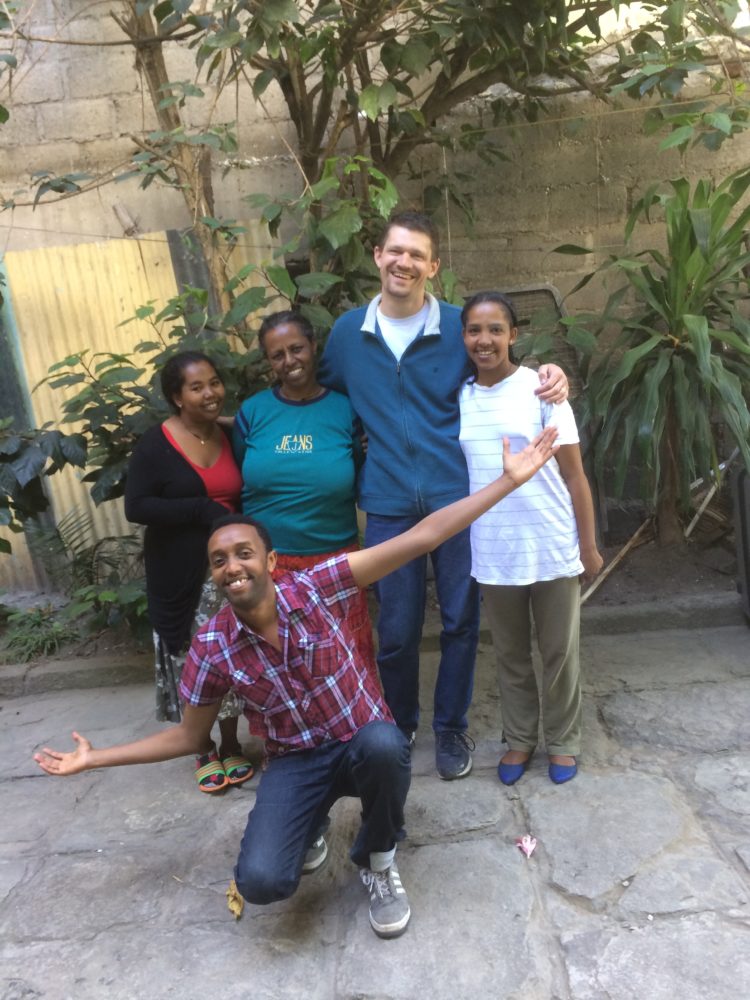 And as for the future? I now have a handful of clear (and some not-so-clear) goals moving forward. It will likely be a few years before I return, but I won’t be losing contact with folks there this time.

For more details and pictures, see these related posts:

I’ll continue to post a few more scraps about the trip here, but if you want to know specifics, send me an email.