In 2017 we saw an explosion of wealthy and powerful men exposed in public as serial sexual abusers, using their positions and influence to prey on vulnerable women. Harvey Weinstein, Matt Lauer, and scores of others in the media and entertainment industry were revealed to be, behind their feminism-affirming public personas, a parade of dicks and dirtbags. It’s not like this is anything new or that even a fraction of a percent of the foul play made it into the limelight, but it was a sizable enough portion for many folks to take notice. Time Magazine, highlighting the phenomenon, decided to make the “Silence Breakers” – the women who risked their livelihoods to fight back – the official “person of the year” on the cover of their latest issue. 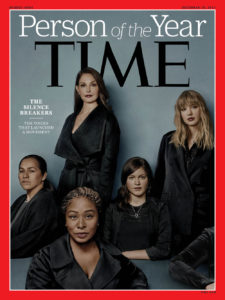 Oh look, there’s Taylor Swift there on the cover too. And what’s on the radio right after her song? The new hip hop tune ‘rockstar’ by rappers Post Malone and Savage 21. It’s been playing at least once an hour on the local top 40 station every day in December. When I open up the iTunes store on my phone, a full-size ad for the album covers the screen. It’s just coming down from #1 on the Billboard charts. Let’s briefly take a look at the lyrics, shall we?

I’ve been f**kin’ hoes and poppin’ pillies
Man, I feel just like a rockstar

Drankin’ Henny, bad bitches jumpin’ in the pool
And they ain’t got on no bra
Hit her from the back, pullin’ on her tracks
And now she screamin’ out, “¡No más!” (yeah, yeah, yeah)
They like, “Savage, why you got a twelve car garage
And you only got six cars?”

Here in the rockstar song, we have the celebration of a rich and powerful man, bragging about having sex with a woman he just met, pulling on her hair while she is, literally screaming, “No more!” – essentially, “Stop it!”. The hell is going on in this song? Sounds like as soon as this gal can wrestle herself away from the abusive “Savage 21” or whatever the artist calls himself, she should join the #MeToo movement and get the community support she needs to face her abuser. Maybe she can get on the cover of a magazine for it. But nope. She’s in the song, as we pay millions of dollars to make this track #1 and honor the (real or imagined) escapades of these young men. 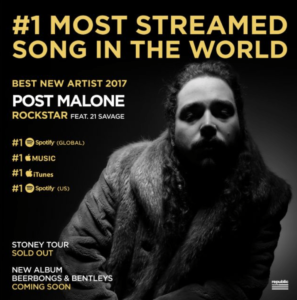 This kind of gangster storytelling and gloating has been standard schmandard fare in rap music for decades. There is nothing new to see here. The only point I want to make is the incredible amount of cognitive dissonance it takes to hold these two things next to each other in the mainstream media with seemingly no sense of irony. By “mainstream media” I don’t mean some amorphous blob of stuff I just don’t happen to appreciate, like some old man yelling “darn kids, get off my lawn!”. I simply mean, in the simplest sense, national television, national syndicated magazines, news, radio, and top reach brands on the internet.

There, in front of the nation, side-by-side, literally seconds apart from each other we find the following: a concerned-looking journalist interviewing an actress who was pressured to sleep with the director in order to be cast in a movie. Immediately afterwards, the top song on pop radio plays as bumper music, blasting with a catchy drum rhythm: “I’ve been f**kin’ hoes, green hundreds in my safe, hundred bitches in my trailer, tryna grab up on my pants”.

I’m not making this up. Let me suggest that the first problem (sexual abuse by powerful men) cannot improve simultaneously while we ramp up the artful idolization of sexual abuse by powerful men. This isn’t rocket science. The first one isn’t going to get better while the second one gets worse. They’ll either both continue to get better as sexual morality is held in higher esteem or they’ll both get worse. You can’t effectively honor women on the cover of the final Time magazine while simultaneously dishonoring them in the top song on pop radio. The two things cancel each other out. To heal the world we need a deeper and more excellent approach.

Postscript: Yes, I realize the song ‘rockstar’ may in fact be tongue-in-cheek, that is, intended to be satire. It is certainly interpreted by some to be. I suspect it is to some degree, but regardless, the overt sexual violence in it offers a stark contrast to the sympathy with the abuse victims it sits next to. I also don’t buy this line of reasoning as an excuse in general. For example, I think the 2014 film The Kingsmen ultimately glorified debauchery, even as it satirized and critiqued the real debauchery of James Bond films.