It’s been 11 years since I first read Rene Girard’s ‘Things Hidden’. I just finished rereading it for the first time yesterday. I certainly understood at least a little more of it this time than I did on the first pass. At the same time, there were huge chunks of the conversation that were hard to follow, mostly because I’m still not well acquainted with the thinkers he is constantly referencing and grappling with. In the past 11 years, despite reading several hundred books, I have still yet to read a single word of Freud, Levi-Straus, Nietzsche, Frazer, Dostoevsky, Proust, and a host of others. On the other hand, I have read a lot of secondary material, including the majority of Girard’s other major works in English, some of his colleague Oughourlian, and work by other people in Girard’s orbit like James Allison and Gil Bailie. So I’ve had the gaping holes somewhat filled in a bit, albeit from the downstream direction.

Probably the largest question I have currently is how to reconcile Girard’s “non-sacrificial reading” of scripture, which, at first glance seems obviously incompatible with orthodoxy. In fact, I’ve seen more than a few people dismiss Girard’s work out of hand as relying on Marcionite garbage. I think that even if it IS, there is still a lot of value to be found nonetheless. I am also somewhat more optimistic now that a better and more holistic reading of the OT can be articulated that still makes room for it traditional Christian thought. Sounds like a lot of work though. Oh well, for now.

Time to change the subject.

Upon rereading all this a few days ago, one passage struck me almost poetically:

JMO: They persist in believing that the concept of divinity is a ‘natural’ one; the sacred king is held to be a kind of reversal of divinity for the sake of political power which is supposedly independent of ritual.

RG: Everyone repeats that the king is a kind of ‘living god’ but no one says that the divinity is a kind of dead king, or at any rate an ‘absent’ king, which would be just as accurate. In the end, there is a persistent preference for viewing the sacrifice and sacredness of the king as a secondary and supplementary idea, for we must beware of rocking our little conceptual boat. Yet what guides our interpretation is only a conceptual system dominated by the idea of divinity, a theology. Skepticism about religion does not abolish this theological perspective. We are forced to reinterpret all religious schemata in terms of divinity because we are unaware of the surrogate victim. If one examines psychoanalysis and Marxism closely it becomes evident that this theology is indispensable for them.

We Christians earnestly looking forward to the second advent of Christ, we are in fact literally saying that “God is an absent king”. He really is the king. And everything good that was ever thought or imagined about an earthly king, that is what he is and more. And he really is absent. He’s not dead. He’s not imaginary. He’s just not here right now. He’s in heaven (wherever that is exactly) at the moment. But he’s only temporarily absent. There is a sense in which all men, and even all creation, are earnestly awaiting the king to come back. Our long deep-seated sociological and psychological urge to sacralize earthly kings (which Girard articulates particularly well) is rich evidence of this longing.

Atheists and secularists say that we try to project god onto our political rulers to give them more power, but in fact the opposite is true. We project earthly kingship onto God because it’s a valid and (more or less) true analogy. Those who despair then say that “the king is dead”, but we the faithful say “the king is absent”, and then add, more specifically, “come Lord Jesus!” (with the exclamation mark!). 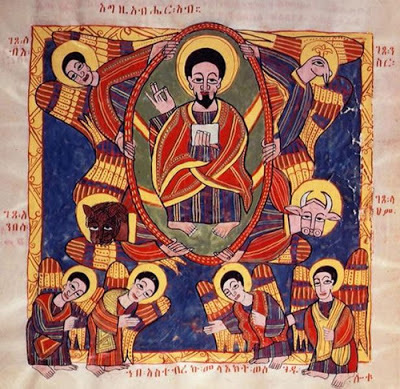 The image is of Christ Enthroned, a icon commissioned by Ethiopian Emperor Iyasu I Yohannes, in the 17th century, for a church in Gondar.