Since the start of the COVID-19 virus lockdown a little over a month ago, our local church has been recording video sermons and posting them online Sunday morning, along with some announcements and an occasional testimony or scripture reading. That has all been just fine, but for worship music a YouTube playlist has been provided. The list of 3-4 songs is picked by our usual worship team leaders so they are ones everyone knows. Unfortunately, they’ve been nigh impossible to sing along with.

These are usually the official recordings or live performances of contemporary groups like Hillsong or Bethel or Chris Tomlin. They sound great. They look cool. And they are nearly impossible to sing along with, let alone “worship” along with, whatever that means. They are highly produced and usually include no lyrics. When they do include lyrics, it’s usually accompanied by busy moving sappy stock nature video, making it hard to read and visually distracting. This stuff is just fine for what it is, but it’s not for congregational singing. It’s been driving me nuts so after the first week we didn’t even try to use the provided playlist but rather sang the same songs or similar in the house with our own piano, guitar, or whatever else was around.

This week was my turn to pick songs for the Sunday worship playlist so I decided that instead of complaining, I’d try to remedy the situation by recording some really vanilla straight-ahead versions of tunes and then putting really simple slides over them. The idea was to make them easy to sing along with in your living room. I think they turned out alright.

I sang and played guitar, my wife sang and played piano, and my oldest daughter played violin and whistle. They were recorded in one take, on one track, with a stereo mic. Assuming they are well received, we’ll hopefully do some more next time!

It’s Good Friday of Holy Week here in the disease quarantine that is spring 2020. I’m reading the Lenten meditations of James Kennedy in his book on Lindisfarne, the Holy Island. I’m going to quote from the passage today at length and add a few things.

One of the great challenges in life is knowing enough to think you’re right but not enough to know you’re wrong. 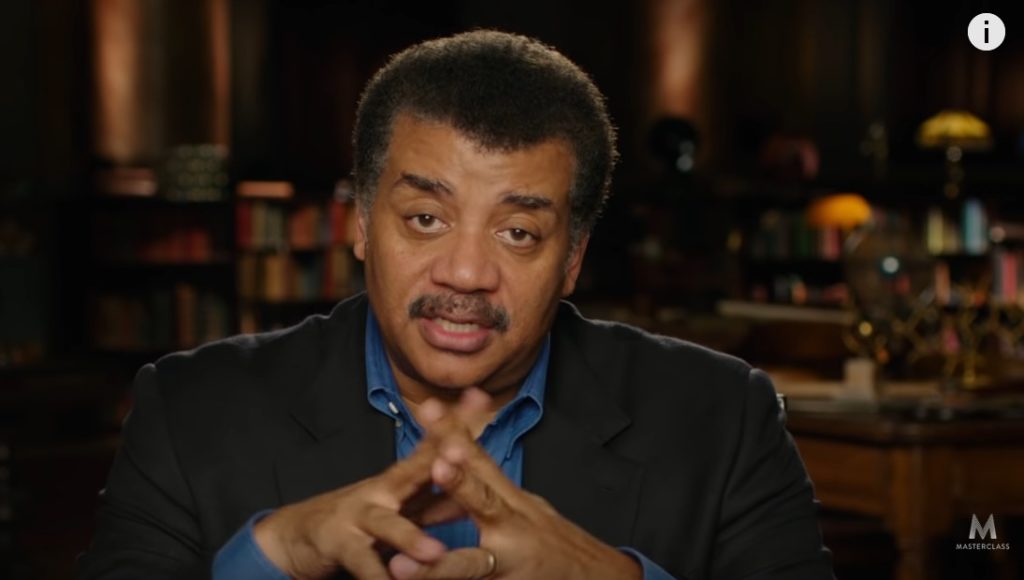 He’s said the same in various tweets and interviews over the years. And he’s right! But this quote is pretty rich coming deGreass Tyson, a guy who’s made his entire career on doing just that – talking with faux-authority about crap he knows nothing about. He understands contemporary astrophysics really well. That’s great. But that knowledge often doesn’t translate well into other branches of science, and especially into psychology, philosophy, politics, economics, and theology, but that’s never stopped him from running his mouth non-stop to become one of the contemporary prophets of scientism. He’s easy to ignore though. I don’t need to pay $180 for his online video course.

Closer to home, it’s discouraging to me when pastors and Evangelical Thought Leaders do the same thing. Some do so while feigning modestly or even embedding literal prayers for humility in their talks or writing. Everyone needs to take their own advice on intellectual humility a bit more seriously. The fact is, the world contains a mountain of things that cannot be explained. Many of these things we can observe and know are real (in our heads or hearts/souls or both), but articulating exactly how they work is a much taller order. What the Resurrection of Christianity is, is one of those things:

Paul spends half the fifteenth chapter of I Corinthians trying to answer the question, “How are the dead raised up?” But to explain how the dead are raised up is as difficult as giving exact answers to questions concerning the intricate workings of nature, the fascinating discoveries of science, or even the composing of a symphony.

It would be just as simple to ask, and equally impossible to answer, how does the heart beat or how does the eye see? We could give a word picture of the eye, for example, this unique member of the body, without which man would walk in darkness. We could liken the eye to a camera which takes pictures, colored pictures and moving pictures, without once reloading, and which focuses automatically in any light, at any distance. We could note that it also develops, prints, and files away countless pictures as mental images in a vast “morgue.” But when the description is finished we still don’t know how such a complex instrument could have been conceived and executed. But it was, for God was adequate to do it. Man’s knowledge, or lack of it, does not affect his seeing. It would be foolish of any man, wouldn’t it, to say “I don’t believe it,” just because he can’t understand how the eye can possibly see?

Or take atom smashing. It is “old stuff” now, but just ask a scientist to explain what happens when an atom is smashed. He will probably say that the atom is not smashed or split at all, that it is transmuted into radiant energy. Atom smashing, which brings to mind an infinitesimal speck disappearing into nothingness, is really a process which releases something the scientists call “radiant energy,” and the atom is not destroyed at all, but transmuted, changed from one form to another.

Man can describe such miracles as sight and nuclear fission, but he cannot explain them.

So it is with the resurrection life and the question, “How are the dead raised up?” Inconceivable as all this is to finite minds, men have clung to the faith that continued existence and growth in some form after death are part of God’s plan and in them is the fulfillment of man’s deep-seated longing for completion.

God has planted within men their longings and their needs. He has also provided the means for satisfying them. The Christian faith declares that God is sufficient to satisfy all human hunger, whether for physical food or for hope beyond the curtain of time, and that men can trust Him.

Paul’s illustration of the seed dying and bringing forth life in a new kind of body is good, and refers to the spiritual body as well as the physical. “That which thou sowest is not quickened, except it die.”

Men are told that physical matter is never destroyed, but only changes its form, which is its death and resurrection, and no one questions this fact. Is it any less easy to believe that Spirit, which makes fleshly matter vibrant and creative, is not wasted eternally, but changes its form, and goes through a similar death and resurrection by God’s grace? One of the famous Compton brothers, the physicist, tells us that “Science has found no cogent reason for supposing that what is of importance in a man can be buried in a grave,” and he might have added, “forever dead.”

This was written in 1957 – a little over 60 years ago. The analogy of “smashing atoms” to describe nuclear fission was dropped long ago. I think it was already pretty much out of fashion when I was a kid in the 1980s. The analogies you hear to describe it today probably won’t be kicking around a century from now as our understanding of it improves and scientists continue to ferret out the details in more recently-built large particle accelerators. Our ways of thinking and talking about theology have of course come a long way too since the first century but they still don’t get anywhere close to uncovering the mysteries of the deep things of God. And that’s OK. We don’t have to understand something all the way or even half the way for it to be very true.

1. Is There For Honest Poverty?
2. My Parents Raised Me Tenderly
3. Sweet Afton
4. Battle of Waterloo
5. Glenlogie
6. Shebeg Sheemore
7. How Can I Keep From Singing?
8. Pretty Saro
9. The Apprentice Boy
10. The Bonnie Banks o’ Fordie
11. Sir Patrick Spens
12. Concordiances
13. The Wild Geese
14. Celtic Wedding Intro
15. The Party

A lot of these are Scottish ballads I ripped off from Jim Malcolm (imitation is the sincerest form of flattery!). Some are also covers of John Doyle, Nickel Creek, and even Enya. We’re all trapped at home right now course, so there was nobody to listen at the time. It’s “live” because I did the whole thing in one take so it’s pretty rough around the edges. I even threw in some fake crowd noise for fun.