When I first began to use a computer to produce letter forms, I thought the task would be easy. But actually I had to work on the task for five years before I got anything that satisfied me. And the first book that came out was a great disappointment to me after I saw it in print. I BURNED with disappointment – I actually felt a hot flash when I first saw it. I opened the covers, expecting to be really happy, but “Oh, no!” it was back to the drawing boards; still more work was needed.

When you design something yourself you are overly sensitive to it. You can’t view it dispassionately. If I’m watching a lecture in which my fonts appear in the slides, I can’t concentrate on that lecture; I keep wondering whether I shouldn’t have changed the letter S a little bit. I’m sure all artists go through this trauma. The more subjective a task is, the harder it is for you to know that you have produced anything of quality.

I don’t have much to say about this. The highlighted sections are ridiculously true. Don’t forget.

During a panel discussion about computer science and religion in 1999, Donald Knuth made this comment while complaining about the sensationalized accounts of theoretical physics research that often appears in places like Popular Science or Scientific American:

The extra detail that gets suppressed when quantum physics gets popularized amounts to the fact that, according to quantum mechanics, the universe actually consists of much more data than could ever be observed. [Paul] Dirac states, for example, that:

[Nature’s] fundamental laws do not govern the world as it appears in our mental picture in any direct way, but instead they control a substratum of which we cannot form a mental picture without introducing irrelevancies.

There is this widely-held belief that when scientists discuss things, they are talking about the REAL world while theologians are just hanging out in a made-up fantasy world. People who love to sport T-shirts emblazoned with the idiotic “Flying Spaghetti Monster” are of this ilk.  Today, nearly every psychologist in business is trying to get the “neuro” prefix worked into his title somehow to emphasize how much what he is studying occurs in solid, actual “nature”, rather than some dubious construction. Mathematicians work in an imaginary world, but they are given a pass since their work ends up being fundamentally useful to natural scientists in the end. There is some popular push-back against physicists that like to talk a lot about “string theory” or “chaos theory”. Even the dimmest person in the room can detect the funny smell of a made-up world behind their conjectures.

But wait! This is all a false dichotomy. It’s not us and them. It’s not the real and the imaginary. The real is indeed very real, and what is going on in our heads is a representation of that – not the reality itself. This is equally true for both philosophers and engineers. We are working inside of a mental picture we have formed. Lots of details have been boiled down so we can contain them. And what gets introduced along the way? Irrelevancies. Garbage. Biases. Mistakes. Misunderstandings. Wildness. You name it – stuff that causes problems because we are working with a sampling of the universe small enough to fit in our heads, not the universe itself.

Everyone is doing this all the time, and doing a good job at it requires some musing. This is why artistic creativity often proves to be a boon to scientists, rather than some kind of saboteur. Boring, unimaginative scientists and theologians are equally bad. Some of our best science has arisen from science fiction. Talking about God well requires a sense of adventure rather than a micrometer. What can keep the cancer researcher picking up her pipette for the 100,000th time? Imagining cancer to be a dark evil worth slaying. What can keep the pastor coming back to comfort his wayward parishioner for the 1000th time? Love, and the belief that the doctrine of the Trinity might actually be a valid “theory of everything”.

Here, computer scientist Donald Knuth explains his experience digging through biblical commentaries for the first time in the library. Having grown up in church, he was at least familiar with scripture, but hadn’t ever dug into much theology before. His account here rings true to me and is especially of value I think because of his status as a bit of an outsider to the subject but familiar with research writing.

Some of the commentaries I ran across were big disappointments to me. in some cases the authors did a superficial job, nt looking closely into the material as a good scholar would. They ignored the challenging questions that other commentators wrestled with. In other words, they were writing for another audience, not for me.

In several other cases the comments seemed to me very lifeless and dry They reeked of academic gamesmanship. Being a college professor myself, I think it is fairly easy to smell such pretensions from a long way off. Of course, I can’t help but sympathize with people who work in academic departments of theology, because they have to deal with much harder questions than I ever need to face. it must be enormously more difficult to do innovative work in a field that has been in existence for thousands of years than it is to do computer science research today. I supposed the best way to get tenure, as a theologian, is to say the wildest new things while not disagreeing too strongly with the people at your institution who received tenure just before you did. In any academic field, people’s egos are bound to intrude on the work they do, especially when their livelihood is at stake.

Fortunately, enough people are left who really love what they do and who aren’t just acting out some supposed strategy for success. I did run across a number of commentaries that I thought were not only excellent but also truly great. They combined superb scholarship with a genuine love for the subject that came through in the writing.

-from Things a Computer Scientist Rarely Talks About

You see that part at the end: “People that combine great scholarship with genuine love for the subject”. People that are untainted by money and the stress of deadlines and the politics of the academy. Who does that sound like who is writing this “truly great” stuff? I’ll tell you who. AMATEURS. That’s right. Hobby bloggers and even some self-published enthusiasts are writing some of the best dang stuff out there – concerning all subjects. Oh, but we need professionals to do the best stuff. Nonsense. They have a bunch of other problems they have to deal with that often prevent them from working through really good (or new) ideas. Amateurs might have the true love and creativity, but without the hurdles that come with an attached career. This difference is now it’s easier to discover or become(!) one of these people than ever before.

Ah, can you tell I dug up an old hard drive and found a bunch of projects I did 10+ years ago back at the university? This one was for a friend of mine who played bass clarinet. This solo part has been adapted to keep the lines within a nice range, occasionally taking certain phrases down an octave. Double stops have also been either removed or replaced with arpeggios. If I recall, she didn’t get the opportunity to actually play this with an orchestra. It’s a good piece though and should actually sound pretty nice on a B.C. provided they could get enough volume out of it. 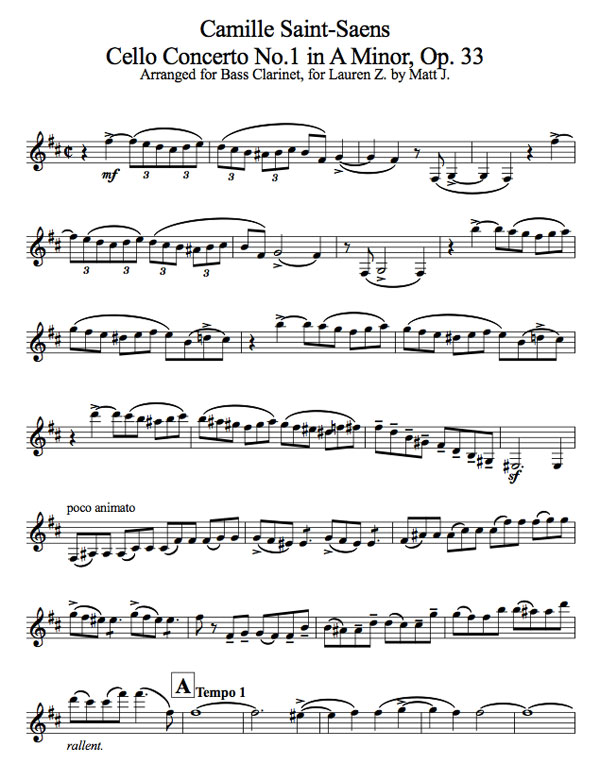 This fall I directed a small string group that ended up consisting of 6 kids aged about 8-11. They were all in at least Suzuki book 2, but a couple could barely read and a couple others were fairly advanced. No published music I could easily find bridged the gap, so I arranged something practical on my own this evening. As I have greatly benefited from people offering free ensemble music online in the past I figured I would post this for anyone else to use or adapt if they wish, even though it isn’t particularly good! The files are PDFs in letter format. 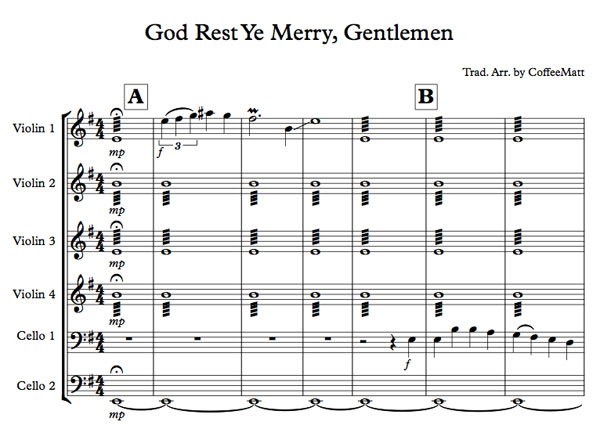 Everyone gets the melody at least once during the three variations. The tremolo at the beginning is meant to provide a somewhat mysterious feel. The small interludes given to the first violin are supposed to have a middle-eastern flavor and be taken out of time and possibly embellished upon. The 2nd cello part is meant to be the easiest although there are a couple of brief finger extensions.

A snippet from the Ethiopian Orthodox liturgy: 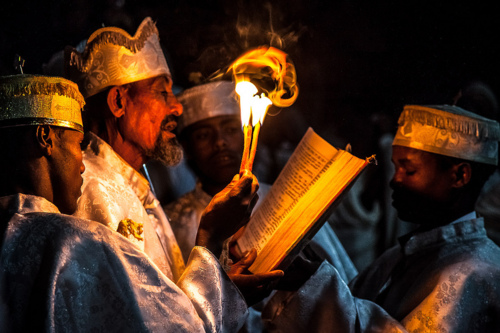 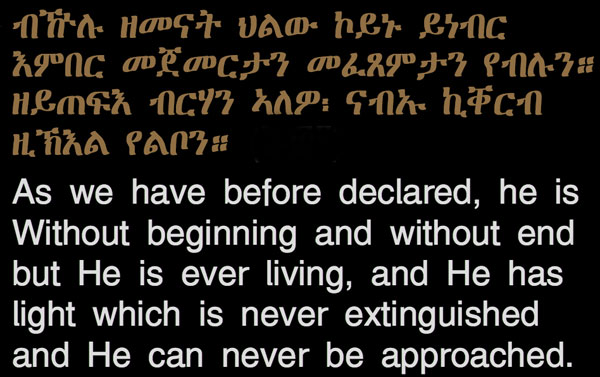 Bowls and peeled back plastic wrap
Reveal three different depleted leftovers
All ground-beef based, like the budget