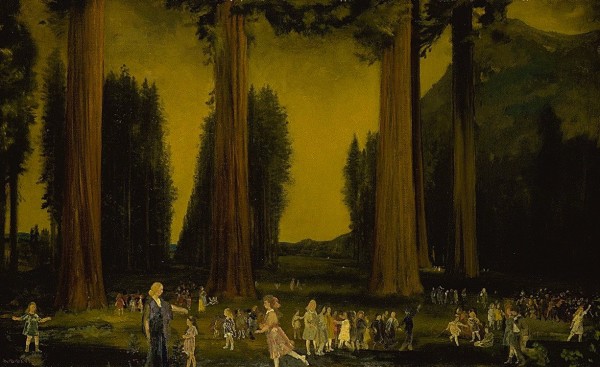 Bill Cosby (decades before he became anathema this past year), in one of his most excellent reflections on childhood, described how he and his friends used to play in a vacant lot filled with rocks and broken glass. Nobody ever got hurt until the adults turned it into a playground and in the first week three kids had broken their arms on the monkey bars and several others had delayed their entrance into puberty by being crunched on the seesaw. Before, imagination reigned with unpredictable danger. After, prescribed exercise and predictable injury.

The new play structure in the park across the street from my house takes this ethos one step further. Instead of dirt or bark, it’s on a deep cement slab, which was then covered by recycled rubber padding so children would presumably not be able to hurt themselves. Consistency is king. I feel blessed to have a 100-year-old willow tree in my back yard that is ripe for climbing and falling out of.

The world is becoming disenchanted around me. Down in the local coffee shop there used to be a pipe-smoking room where one could go and pretend to be a young C.S. Lewis or J.R.R. Tolkien. Sometimes (whether you smoked or not) it made doing homework just romantic enough to be tolerable. It’s no longer there – shut down a few years ago by the government’s right hand while it’s left hand simultaneously legalized the sale of weed. The spicy old wood and tobacco of our forebears? Out. “Premium bud” in blisterpacks? In.

Gone is the dicey used book store down the street that used to house the local Wiccan coven. It’s a geological survey office now. They’re still tramping through the forest, but far fewer are pretending to be druids. The Turkish hookah lounge is now home to a real estate agent. The infamous “Rat Haus” bar is an antique shop where even things that were brand new for my grandparents are fair game. All three fountains on the college campus have been replaced with flower beds to reduce cleaning costs and the century old carillon bells in the clock tower are now handled by a loudspeaker hooked up to an MP3 player on a timer.

Because we’re evangelical protestants, worship was and still is held in in a gymnasium or a warehouse with carpet. Stained glass? A baptismal font that doesn’t double as a cattle watering trough? Even a steeple? All apparently extravagant non-essentials from a per-industrial dark age. Who needs cathedrals when you have a reverb stomp box for your guitar?

Even as recently as 20 years back, I remember reading Michael Crichton’s novel Congo (itself a homage to King Solomon’s Mines) and being enchanted by its unmapped reaches of central Africa. Now it’s all on Google Earth – in 3D. I’m not the first or likely even the hundredth person to lament this loss, or rather the side-effect of this gain. In most accounts, satellite imagery features prominently as the bitterest pill. Is there anything mysterious left in the world?

Yes. TONS. And it’s because man and science doesn’t have everything so tidy as we presume. Talk is cheap, but being there on the ground is something else entirely. A brutal storm on the ocean is only barely less scary today than it was for Magellan. We think we’ve got the world all figured out now. Buzzzzz. Wrong. We don’t have a clue. The unknown abounds behind every bush, in every bush, munching on the berries. Kids keep asking these questions. So should we, even if it seems like all the answers are at our fingertips on Wikipedia. They’re not. Not even close. Wake up this morning. Expect to have your mind blown.

I just finished reading another biography of C.S. Lewis. (The Narnian by Alan Jacobs. Definitely recommended.)

It again strikes me how, despite being a huge hero to American Evangelicals (myself included), “Jack” would be severely unwelcome in most of our churches – at least in any formal capacity. He’s not nearly Reformed enough for the capital ‘R’ Reformed. It would probably be more accurate to say he’s not nearly Puritan enough for the American Reformed. He was married to a divorcee and spent many of his years living with his chronically drunk brother, all while putting away quite a bit of beer and tobacco himself. These are all highly suspicious circumstances that would have immediately gotten him disqualified from even leading a casual bible study in any of the Pentecostal or Baptist church’s I’ve been a part of. Despite his mastery of Latin and Greek and his encyclopedic, nay, LIBRAIC knowledge of Western literature, he often seems to have not read (or cared) about the “right” books to have any street cred with proper theologians either. Where are the records of his long grapplings with Calvin, Anselm, or even Augustine? Apparently he was too busy writing science fiction for that.

Lewis was in a unique position to be an especially ecumenical Christian. As an essentially secular scholar, and never a priest, or pastor, (or “worship leader/church planter” for that matter), he didn’t have a dog in the fight when it came to denominational distinctives. Though he had his reasons (discouraging to Tolkien) for not joining Rome, the idea that Catholicism was not a legitimate form of Christianity would have been utterly ridiculous to him. From this position, he could think and write for a wide audience without fear of being defrocked like George MacDonald, one of his favorite authors of the past. Any one in this position today (e.g. pastor-turned-conference-speaker Rob Bell or soon Mark Driscoll, or author-blogger-wut? Donald Miller or Rachel Held Evans), are denounced from many corners as being illegitimate due to their lack of oversight, flock, or formal ecclesiastically-vested authority. But Lewis is really in exactly the same boat as them. Perhaps he did get flack like this during his lifetime, but it seems all water under the bridge now.

My respect for Lewis has really only ever grown with everything I’ve ever read of his or read about him. Still, I do suspect that had he not kicked the bucket a 64 and lived until 84, he most certainly would have “gone off the deep end” on some key theological topic. Maybe he would have veered toward universalism like Madeline L’Engle. Who knows, but I’m sure he would have said or written something embarrassing to all of us fanboys (and girls) a half-century later. As it is, he quit while he was still at the top of his game, which probably serves to sweeten our memories.

Nothing can quite prepare one for the “staring into the void” experience that one has upon first meeting a person in the business world that has walked into reality straight off of the Dilbert comic strip. There are the buzzwords delivered with a straight faced, the honest, even vulnerable or boyish enthusiasm for fleeting mumbo jumbo marketing and management ideas, and the proliferation of gadgets. Wasn’t Michael Scott just a silly character on The Office? No. Something very much akin to him is terribly alive and real and sitting across the table from you. Day after day you wait for the facade to crack and a relatable, self-aware, and slightly cynical person to emerge, but it never happens. It’s day 400 since their arrival to the office and they want to have a “stand-up” meeting to talk about “core values” and show off a Gantt chart made for planning the company BBQ – all without any trace of irony.

It’s difficult to accept the existence of this man or woman. It’s easier to acknowledge someone of a very different religion living in say, Yemen who wants to kill you. They are on the other side of the world and grew up under very different circumstances. They are ethnically, linguistically, culturally, economically, socially, and historically utterly different from you in the West. You may utterly disagree with their philosophy and  conclusions, but it’s not hard to at least accept they arrived at them via a very different path. But the live-action Dilbert co-worker – how did he come about? He grew up in the same region, in a family just like yours, and even watched Duck Tales every afternoon after school, yet behold, here he is, stone-cold serious about “generating synergy” amongst departments via the new “content management system”. Thirty seconds later, he sounds like anyone else, side-tracked by a discussion about the latest episode of Breaking Bad, or where the best place to go fishing is this weekend. What sci-fi-esque rip in the space-time continuum allows such a being to exist?

That’s not a rhetorical question actually. I don’t have a workable theory yet. For years when I was younger, I figured these characters were only mythical archetypes or hypothetical comedic foils. But no dear friend, they actually exist and though not terribly common, are numerous enough that sooner or later you will indeed encounter them. One may even end up being your boss, or your neighbor, or even going to your church, and YOU will be called to treat them with kindness. Know now that they exist. It may help your mind not to explode when the time comes that you must listen and empathize with them. It may also help you forgive yourself should you discover you are one.