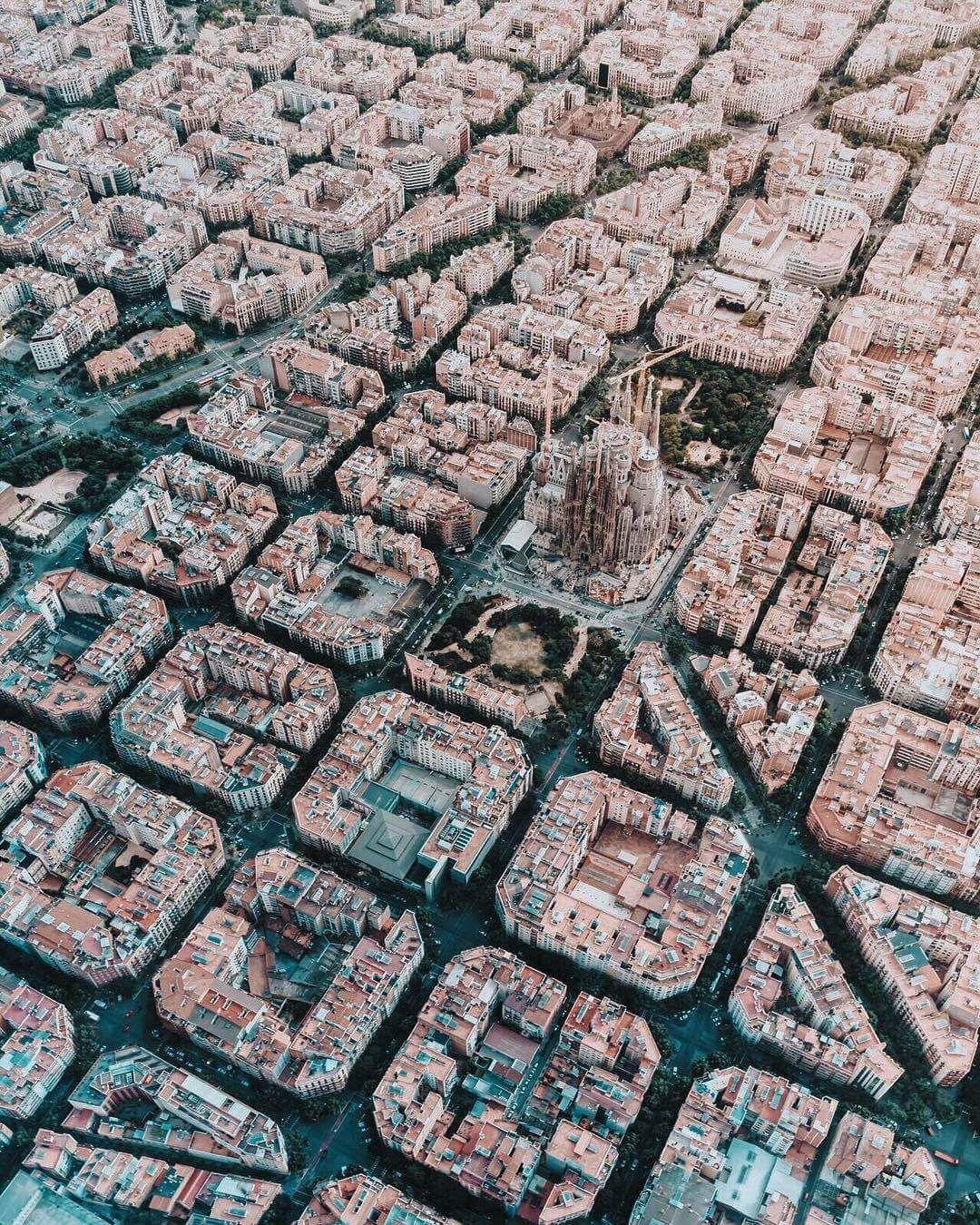 Is man’s consciousness static or dynamic? Depending on your discipline or what you are used to reading, you might prefer if I ask whether it is ‘crystallized’ or ‘fluid’. Lately it seems that ‘rigid’ or ‘plastic’ are in vogue. I’m not just talking about one individual man or woman, but about all of mankind, throughout the known history of our race. Does our thinking really change throughout the ages, or has it pretty much been the same for time out of mind? Certainly cultures and technologies change, but does our thinking really do anything besides repeat itself in different permutations?

One currently prominent theory says that our thinking does indeed change. On the one hand, despite it’s largely imaginary evidence and origins, evolutionary theory is widely popular today. In this story, evolution, progression from a lower state into a higher state, is the recurring theme. Once we were monkeys, then animalic cavemen, then clever, but still superstitious pagans. The ‘Renaissance’ and the ‘Enlightenment’ exploded our minds and we fit contemporary ideas about our own longed-for trans-human ‘wokeness’ being part of this same trajectory. Of course consciousness is dynamic they say! Our brains are physically changing in size and density, our imaginations are expanding, and our incredibly rapid growth in technology in the last century is irrefutable proof. The secularization theory (that religion will fade and become irrelevant in the modern world), fills in the gaps.

On the other hand, Christianity has often taught (or at least emphasized) something that looks like the ‘static’ answer to the question above. Our thinking WAS at a certain place, but since the Fall of man, it’s been brought low and it’s been stuck low in sin ever since. We are born into sin and we die in sin. We are no more clever than the ancients. In fact, they were probably smarter than us, despite our spacecraft and smart phones. Though some woefully pronounce it a devolution, others are quick to point out that ancient Rome was just as morally corrupt as we are today and in many of exactly the same ways. The short answer is that there is nothing new under the sun. Oh, except Jesus. He’s a big deal, but things are pretty much going to stay the same until he comes back to redeem all of creation… later, perhaps much later. In the meantime, the world is full of stupid, petty jerks just like it always has been.

In the world of Christian thinking and scholarship, I have often observed a peculiar kind of push-back to and put-down of new or imaginative ideas. It’s often not explicit, but is more of an undercurrent – the idea that orthodox belief is unchanging in a reality that doesn’t change with minds that don’t change and brains that don’t really change either. We are not discovering truth so much as just articulating it better, or communicating it more effectively in the latest iteration of our corrupt cultural morass. C.S. Lewis’s condemnation of “chronological snobbery” is often invoked (I have invoked it myself on many occasions!), but it seems to me to be used too quickly and too often. The assumption is that there are no really new ideas – cannot be in fact. Even the Reformation, as big a deal as it was, wasn’t anything new but just a ‘back to basics’ ecclesiastical reform movement. Calvin didn’t say anything Augustine didn’t already say (or would have said if he had lived longer), and Augustine didn’t really say anything St. Paul didn’t already say, except that perhaps he was a more clever writer. We’re not evolving. We’re not getting better. Maybe we got some freebies dropped on us about the time of Pentecost, but that was straight from God and it was a long time ago. We aren’t ‘progressing’ like the ‘progressives’ want us to believe. In fact, the virtue of humility is often indicated in a public admission of how hopelessly derivative our work and thinking is.

But wait just a minute. Shouldn’t Christian theology allow for and even hopefully encourage us to expect new life, new ideas, new thinking, and (dare I say it), ‘progress’? Perhaps even a consciousness that wasn’t possible before? Something the prophets yearned to see but could not (but we can)? If the Holy Spirit is at work, constantly at work, relentlessly at work in our hearts and minds, and in the hearts and minds of (literally) millions and billions of people, shouldn’t we allow for the possibility of genuinely new ideas, or genuinely new awareness of aspects of reality? That is, actually improved philosophy and theology, even as we have actually improved science?

Someone is scared of this idea and the bad company it keeps and has decided that the best defense is to make theology (and a host of other disciplines along with it) as boring as possible.

C.S. Lewis argues in The Allegory of Love that something significant happened in the middle ages that dramatically and permanently changed our conception of what romantic love is. This wasn’t just a recycling of ideas or restating of them in a fresh way, but a deeply fresh thing in and of itself. The scripture writers did not foresee it. It hadn’t happened yet. We are so engulfed in it now that we project it back onto ALL the old stories as if things have always been that way. Even if we now scale it back or temper it with cynicism or “realism” or historical knowledge, we can’t get away from it entirely. Love has a new dimension to it and more possibilities than it ever did for our distant ancestors and there’s no reversing this (dare I say it again?), “progress”.

Rene Girard’s work also hinges on the possibility of man’s whole psychology and consciousness taking a crucial turn at a particular point in history. Girard shows that all the myths of Earth are always written by the victors in such a way as to cover up their founding murder and guilt. The victims, especially those cast out by their people, have no voice, no rights, and no recorded (true) history. Concern for victims wasn’t just uncommon, but was literally UNTHINKABLE. Only the Old Testament, especially a few of the psalms, even hint at other possibilities. That all changes with Jesus Christ. He’s innocent and everyone knows it, but is killed anyway, even while forgiving his enemies. He comes back from the dead and continues to acknowledge evil and then forgive it. In this way he is nothing like any of the other myths. From that moment in history forward, scapegoats quit working. Not entirely of course, but their power steadily diminishes and they become less and less effective at restoring order and helping us sweep our sin and failure under the rug. Things can never go back to the way they were. We are too deeply aware of the innocence of victims now.

One can disagree with all sorts of details regarding what I just recounted in both Lewis’s and Girard’s ideas. I’m not entirely convinced myself about parts of either of them. That’s fine. The point I want to make is that these are NOT boring ideas that emphasize how stagnant and static mankind is, but rather an account of how we have perhaps REALLY changed and for the better. Who could bring about such change in such a stubborn people? May I suggest the third person of the Trinity? Let’s be on the lookout for his hand rather than assuming he’s asleep. Man may be mired in sin like cement, but jackhammers exist.

Third time was a charm for getting old used embossers to work! A Juliet Pro 60 embosser we got on eBay for about $400 turned out to be in fully working condition. What’s more, it can print double-sided (interpoint) braille on large sheets of tractor feed paper. With the wider format and using both sides, we were able to squeeze the entire Oromo Gospel of John into 73 pages – low enough to fit in one volume. We used 2.5 inch 19-hole comb bindings to put them together. Here is a picture of all ten copies ready to go. 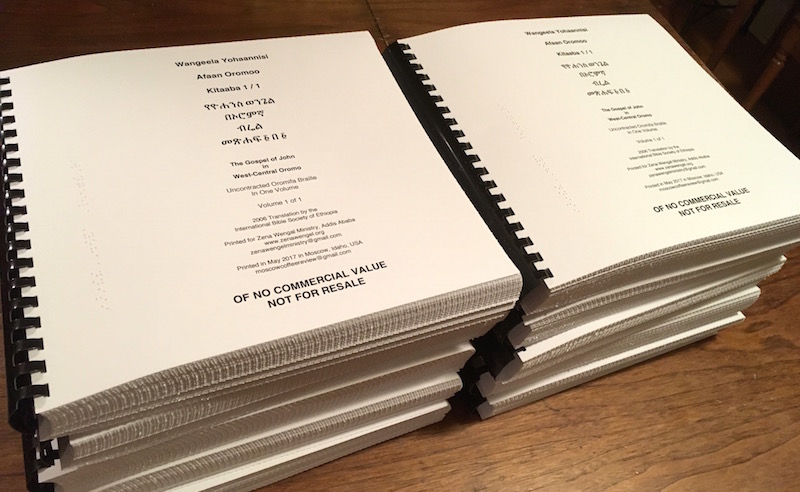 It also helped a lot to use the Duxbury software for formatting. We were able to get some help paying for a legit license. It saved a lot of time to not mess around with my own hand-written scripts as much. Incidentally, about this same time I received official permission from the International Bible Society to print and distribute these.

I sent them to Ethiopia in the extra suitcase of my friend Josh Quaade, who helps run One Changed Life, a street child sponsorship organization in Addis Ababa. He delivered them to my friends Berhanu and Tafesse who took them to Sebeta a few days later. I just received pictures of their arrival. 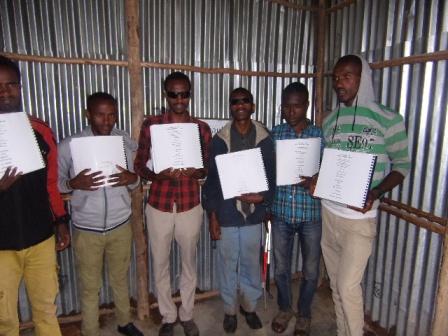 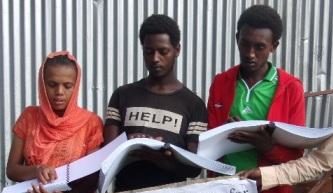 They were happy with the result. The only feedback I got was that plastic covers would help them stand up a lot longer. I agree. I looked into nice plastic 11 x 11.5 19-hole punch covers earlier, but they were $1.50 a sheet. I didn’t feel like making the project $30 more expensive was a good idea at the time. I’m going to try to find a less expensive source for them in the future – likely punching them myself. They are a pretty oddball size so not readily available.

The plan is to print and ship one more batch of scriptures sometime before the end of the year. This time maybe 50 volumes or more. I’m waiting to hear back on what books of scripture would be the most helpful to distribute. Maybe just more of John, but perhaps Psalms or other NT books. In addition to the fellowship of Oromo speakers in Sebeta, some of these would likely go further west to Bako.