Since, the Misses is away this weekend, I thought I’d cook up something yummy. Well, something that I think is yummy, but that wifey would never eat. I really enjoy a good stew or soup. She won’t have anything to do with them though. Oh well! So I went looking for recipes and I found a beef stew that called for Guinness stout beer as the base instead of water. It’s originally from a cookbook called The Complete Book of Irish Country Cooking. I’d never had anything like this before, so I decided to give it a shot:

The recipe called for 2 pounds of stew beef, but no taters. What the heck? I only had one pound of beef, so I supplemented with some Yukon gold taters. 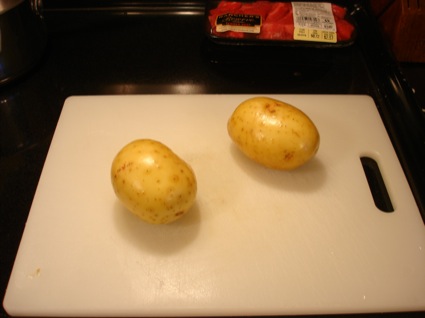 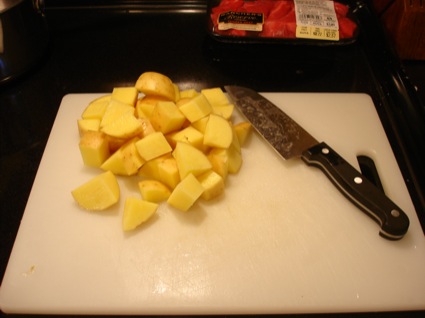 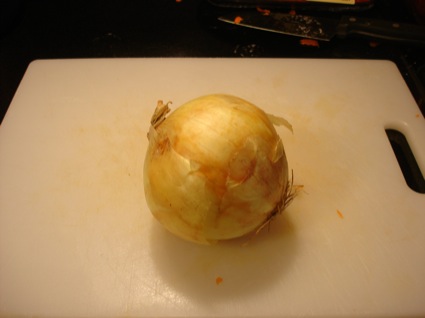 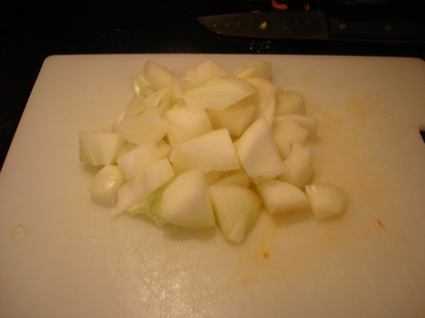 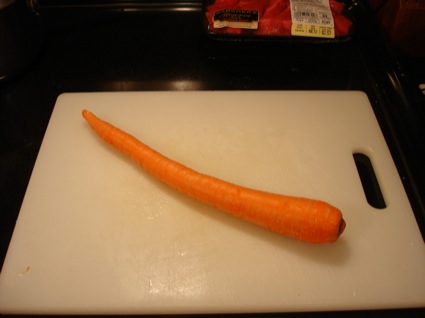 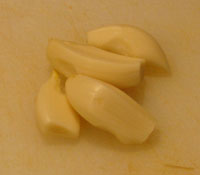 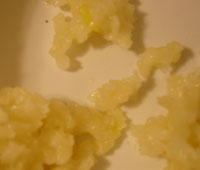 Before browing the stew meat, you flour and season it with salt and pepper. 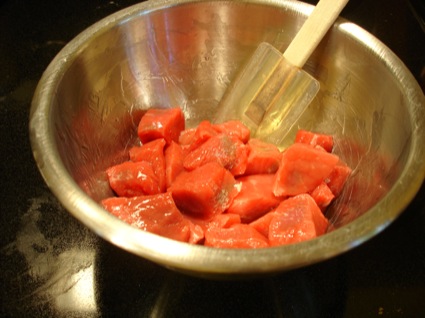 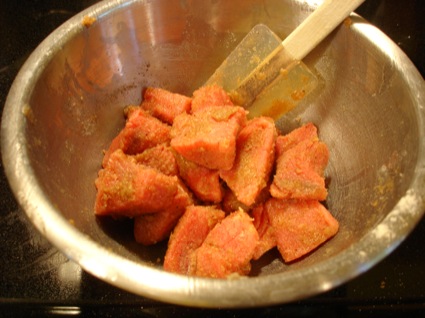 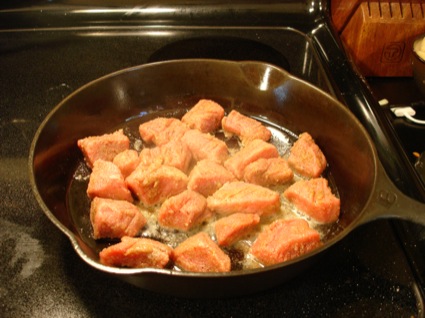 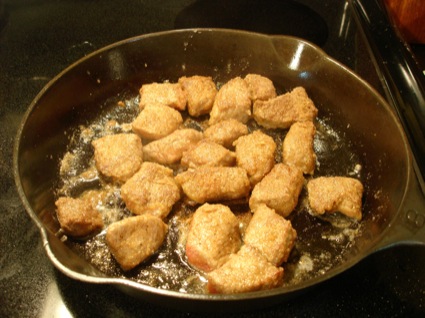 Now it’s time to add the garlic, onions, and little bit of watered down tomato puree for about 5 minutes: 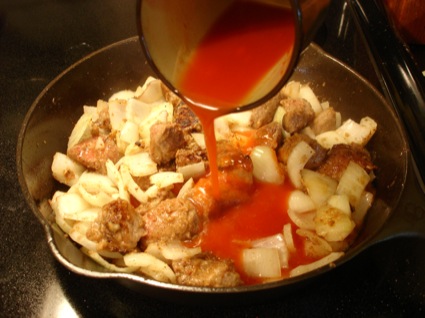 Once that is done, you scoop the mixture into your stew pot. Now it’s time for the beer! Luckily, where I am, the Food Co-op sells these by the can or bottle for about $1.50. In a typical grocery store, you’d have to buy an entire six-pack. 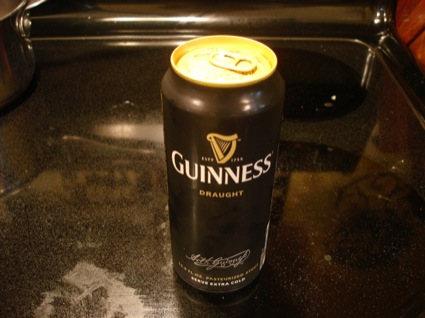 One of the thing that makes Guinness good is that it’s made fizzy not by carbon-dioxide (like in most beers or soda pop), but with nitrogen. It’s what gives the drink it’s distinct foamy head. The bubbles are must smaller and not as bitey. For years, you could only get Guiness on tap, but now they have developed a special nitrogen releasing device that floats around in the can and triggers when you open it. It sounds like the ball rolling around in a rattle-can of paint. 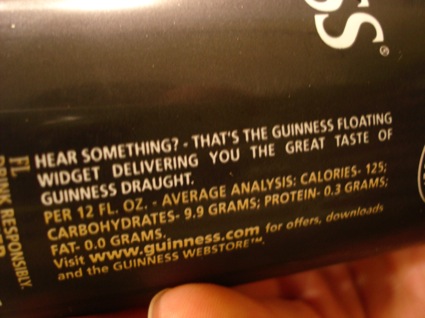 Anyway, this is a cup a a half of fluid. We pour half of it in with the remaining carmelized beef on the bottom of the pan and bring it to boil. 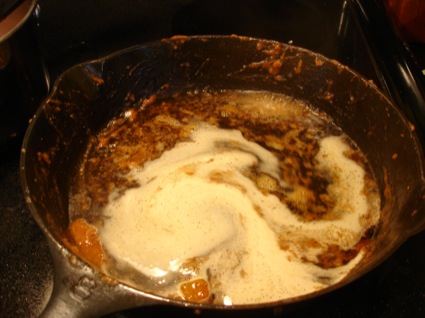 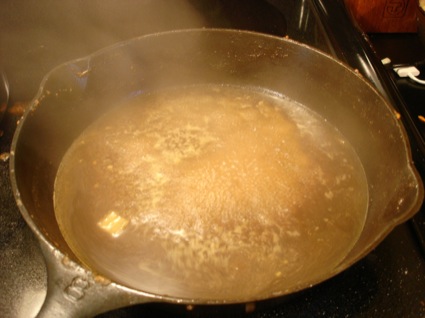 Then we add that mixture to our pot, along with some thyme and more salt. 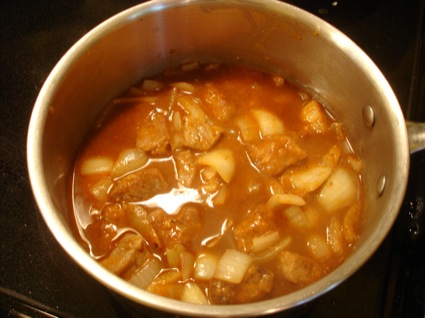 Now add the potatoes, carrots, and the rest of the beer. 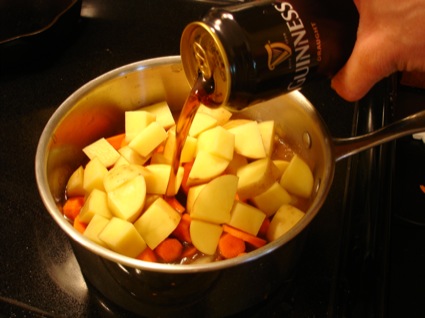 Let it simmer for 3 hours… 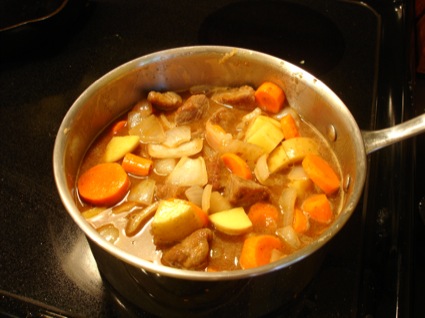 Salt to taste and it’s ready to serve! This yielded 4 good-sized bowls. 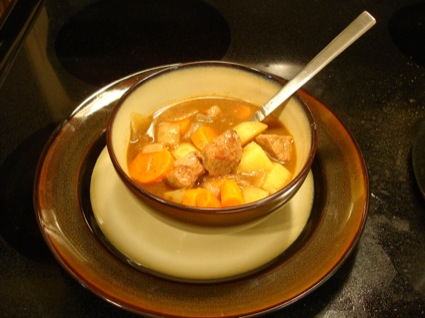 It has an interesting malty flavor. Pretty good, but not super. I’m set for lunches now until she gets back though! My daughter informed me she wanted nothing to do with my “spicy soup”. Of course.

Here is the original precipe:

Trim the beef of any fat or gristle, cut into cubes of 2 inches (5cm) and toss them in a bowl with 1 tablespoon oil. Season the flour with salt, freshly ground pepper and a pinch or two of cayenne. Toss the meat in the mixture.

Heat the remaining oil in a wide frying pan over a high heat. Brown the meat on all sides. Add the onions, crushed garlic, and tomato puree to the pan, cover and cook gently for about 5 minutes.

Transfer the contents of the pan to a casserole, and pour some of the Guinness beer into the frying pan. Bring to a boil and stir to dissolve the caramelized meat juices on the pan.

Pour onto the meat with the remaining Guinness; add the carrots and the thyme. Stir, taste, and add a little more salt if necessary.

Cover with the lid of the casserole and simmer very gently until the meat is tender — 2 to 3 hours. The stew may be cooked on top of the stove or in a low oven at 300 degrees F. Taste and correct the seasoning. Scatter with lots of chopped parsley.