“One will never be a good economist, who is only an economist.” Tomas Sedlacek comes up with this self-described “liberal paraphrase” of a quote by John Stuart Mill to introduce his recent book, The Economics of Good and Evil.

“A person is not likely to be a good political economist, who is nothing else.” is the original.

I believe this phrase is mightily true. You can say it about any field. Is there anyone more guaranteed to be a tilted theologian than one who is only a theologian? This is why the best pastor is likely to be a 50-year-old man who has raised a family and worked for a living for thirty years. The young bible-school grad in his mid-twenties has no business attempting to serve in this capacity at all. Perhaps he may as part of a larger team of elders, but definitely not by himself. That would be a terrible idea, regardless of how talented he is. 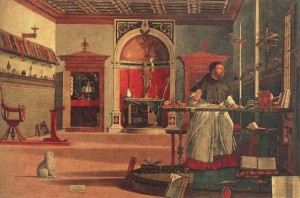 The same thing goes for musicians. I’ve had the opportunity to rub shoulders with a lot of professional guest musicians that have come through to play classical gigs in this university town. Some of the conservatory types, usually east coast or eastern European it seems, are, well, how do I put it? They are often not well rounded people. And it shows. They radiate strangeness when they walk into the room and when they talk, and even when they play, full of technical mastery though they may be. Many of my favorite musicians that have come through town have been, on closer acquaintance, turned out to be mothers, fathers, businessmen, scholars, inventors, teachers, writers, etc., even bartenders. The ones who do nothing but music – it almost seems as if at a certain point their hyper-specialization backfires on them and they are unable to grow emotionally/mentally/artistically past a certain point. I’m generalizing terribly here and lots of faces fly through my mind as I mull this over. As a whole though, it seems to confirm, as far as I can tell, the above quoted notion again.

Back to the book at hand – the author is writing a book about economics, but it is really a history book. A history book that draws in a fair amount of psychology, science, ethics, and even theology.

In today’s modern academy, this is called “Interdisciplinary” scholarship. Woopie. As opposed to the established norm of never leaving your own house? I believe that this sort of scholarship needs to be the norm across the board. Indeed, much of the best scholarship has ALWAYS been interdisciplinary. That we now have to designate it as such to stand out from the pack does not shed positive light on the state of the university during the past half-century.

One might wonder at the title of this post since Google tells me that by far one of the most popular things that I ever written on this blog was a post called “Interdisciplinary Studies: The Latest Junk Degree”. Yet even there I praise interdisciplinary studies. My criticism is of the contemporary university’s handling of it as a “choose your own adventure” story with a lucrative career waiting for you at the end.

I am learning to enjoy more things than ever before. Last year was the first time I ever read an entire straight-up history book – and I loved it, though I used to think that I hated that sort of thing. Hot sauce and beer have been reconsidered. Gosh, I even listen to country music sometimes. Dare I even admit that in print? All of them are expanding and stretching how I approach the things that are old hat to me. I love it and wish to continue. I hope that I can transmit some of this diverse joy to my children as well.