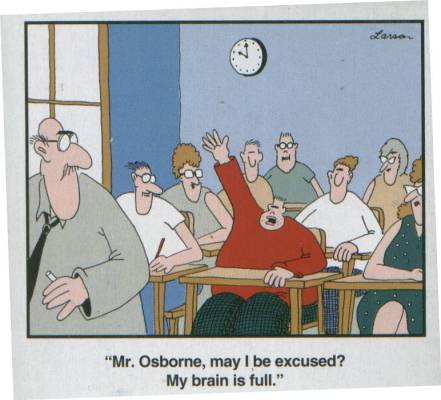 I can’t say I’ve often felt like the young man in this old Far Side comic. Learning can be hard work, but I always feel like my physical body breaks down into sleep or exhaustion before my mind is satiated. Neverthless, I HAVE felt my brain hurt tonight wrestling with the foreign language of my daughter.

My wife and I learned about 350 Amharic words using flashcards every day for the month preceding her arrival. About 100 of those have come in really handy in understanding her. We’ve been able to add about 20 more to the list now that she is home. Still, there are so many things she insists on saying and repeating again and again that I just can’t understand.

One problem with toddlers is that they aren’t exactly articulate – and I mean in the sense of raw phonetics. Being a bit loose on vowels and replacing an “eh” with an “ih” can suddenly make it nearly impossible to sort out in the dictionary, especially when working with the (still confusing) Ge’ez syllabic script. No, none of the dictionaries use IPA or Latin transliterations (including the online ones). In addition, verbs are conjugated with not just a suffix, but also a prefix. The result is that they sound so different than the infinitive, I often can’t pick out what’s in the middle.

Sometimes we can get her to tell us what something is by asking her “what is it?” and putting her hands on it. It’s nice to know that when she says, “Daddy, wetet chammer, dabo bakka” she mans “More milk please and I’m done with my bread”. Still, I think the word I use the most is just “eshi”, which means “OK”, or, in this case, “OK, Just keep talking little girl.”