I was taught as a child to read my Bible, but I wasn’t exactly modeled how to do that. I heard thousands of hours of preaching from scripture, but the reading and preparation going on behind the scenes was invisible to me. I remember when I was 8 or 9 years old, my mother had a list of things we could do over the summer to earn money. I think one Saturday I washed all the windows in the house. Another day, the assignment was to read the gospel of Mark. So how did I end up reading it all? 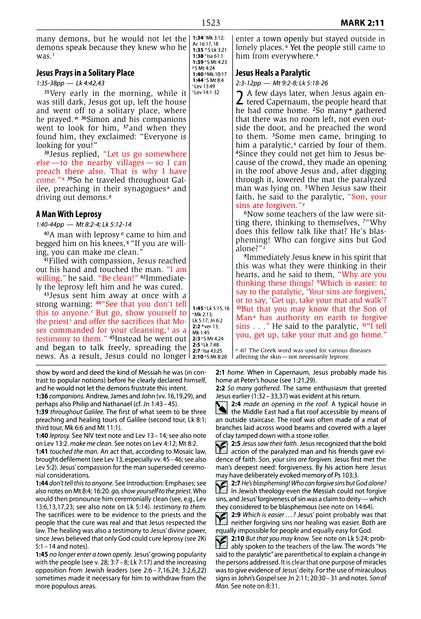 Early on I was given a hefty NIV study bible which had extensive notes. I would say it was at least 40% notes. I read every last one as I went along. I did the same with the well-done “Spirit Filled” NKJV study bible I used throughout college. I’ve read them cover-to-cover each at least once, and some sections like the gospel of John I’ve probably read at least 20 times. I enjoyed both of them and still pull out both of them frequently. Despite all the years of Sunday school and years of catechism, I think that reading through every single one of those footnote commentaries is what really gave me a broad understanding of scripture. Even now reading them is comfortable, even when they lead in theological directions I now have a different or more nuanced opinion on.

The topical preaching I heard so much of was hit and miss and it was only later in life that I really understood how scandalous the gospel was. But I have to say that I owe a tremendous amount to those heavily annotated tomes I still have on my shelf now. My mother bought the first one for me, my Grandmother the second one. Perhaps that is one reason I still love paper books. eBook readers don’t lend themselves well to parallel commentaries. What’s funny is that I’ve occasionally been exhorted by preachers to “not stop and read the footnotes”, as if might break a spell. Ha! Good luck. I can’t help read them all, at least a page at a time.

Here, Kathleen Norris describes another way to read scripture, one I am only now beginning to familiarize myself with:

The Benedictine method of reading psalms, with long silences between them rather than commentary or explanation, takes full advantage of these paradoxes, offering almost alarming room for interpretation and response.

For all their discipline, the Benedictines allowed me to relax and sing again in church; they allowed me, as one older sister described it, to “let the words of the psalms wash over me, and experience the joy of just being with words.” As a poet I like to be with words. It was a revelation to me that this could be prayer; that this could be enough.

I think I could read it all over again – this time with no commentary at all, just silence. Let the silence serve as the richest of footnotes.

How do we learn to read scripture? I don’t recall really being taught. I was exhorted too all the time, but who showed me how? I think I got lucky but I would not want people to have to fend for themselves so much. Better to learn when 8 than when 20. I’m not sure what to do with my own children at this point. This needs some more thought.