Psalm 91:3-13 is a fascinating passage. Ancient Hebrews scholars we are told considered it to be a description of demonic attack. Several passages in the New Testament seem to confirm the metaphor, especially the long ending of Mark.

Surely He will deliver you from the snare of the fowler and from the perilous pestilence… You shall not be afraid of the terror by night nor of the arrow that flies by the day nor of the pestilence that walks in darkness…etc.

One person in particular seems to have this passage down very well. Indeed, it is Satan himself, who quotes verses 11-12 when tempting Jesus:

For He shall give his angels charge over you, To keep you in all your ways. In their hands they shall bear you up, lest you dash your foot against a stone.

It seems to me that Satan is obsessed with himself. So what would be his favorite passages of scripture anyway? The ones about him of course! His thought is reflexive – ever festering on himself, closing back in on himself and hungry to suck in others into his despair and fascinated failure.

Rene Girard’s work shows us that the modern conception of the human being as an independent, autonomous free-thinking well of desire is completely false. We THINK our desires and tastes and visions come from within and we stew about them – scheming a way that we might bring them to fruition. But no, in reality our desires come from others. They come from our formation over time in our communities and we get them by imitating the desires of others in our proximity. Our deepest held desires – for companionship – and to make things – comes from our creator.

Satan is the same way, not just with his desires but with his very being. He believes his own lie – that the making of things is his own idea and not something he enviously copies from the Creator. His aim and aura is to always draw us into the same deception. In doing so, we become more concerned with ourselves. We are moved to the center of the universe, with our loved ones and even God on the periphery.

Dorothy Sayer’s captures some of this mystery of the Satan (articulated by Augustine and others as well) in her play ‘The Devil to Pay’.

FAUSTUS: Who made thee?
MEPHISTOPHELES:God, as the light makes the shadow.
FAUSTUS: Is God, then, evil?
MEPHISTOPHELES: God is only light,
And in the heart of the light no shadow standeth,
Nor can I dwell within the light of heaven
Where God is all.
FAUSTUS:What art thou, Mephistopheles?
MEPHISTOPHELES: I am the price that all things pay for being,
The shadow on the world, thrown by the world
Standing in its own light, which light God is.

So Satan is the father of lies who, though just a shadow, sees himself as the light. When we imitate our false father, our thoughts reflex back to ourselves – to our desires and their centrality.

Demons and their kin are the ones most trapped in the swirl of this obsession. Like their leader, their dearest topic is themselves. 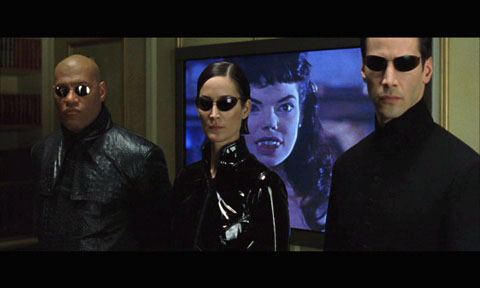 Curiously enough, I think this notion is captured perfectly in a scene from that disappointing film sequel, The Matrix: Reloaded. Persephone helps our heroes Neo and Trinity to rescue a prisoner. Who is guarding him? Some werewolves. What are they doing while they sit around? Watching a vampire movie. It’s supposed to be ironic and slightly funny, but frankly, I think it’s exactly what real demons would watch on TV. It’s their favorite subject, just like Satan has all the parts of scripture memorized where he gets a few lines. He doesn’t even seem to care that he dies in the end. He just can’t get enough of… himself, for the time being.