Pop music may be a perennial rubbish heap, but that doesn’t prevent an occasional song on top 40 radio from making your ears perk up and then, after a closer listen, slam you into the wall with its emotional power. I know I’m nearly a year late to the party on this one, but I think I’d have to put Sia’s “Chandelier” in this category.

Forget the rather jarring and buzzy music video (450+ million views) featuring child dancer Maddie Ziegler, the music is what caught my attention. Sia is not the typical young 20-year-old America pop star, but a previously lesser-known Australian women pushing 40. She has a scratchy voice with a natural break that instead of avoiding, she uses to great affect. The chorus of Chandelier finds her over-singing on the edge of her range, like an electric guitarist over-driving their amp. She’s singing the paint off the walls, but not like a shining opera star carefully in control, but rather like a Saturn V rocket with a less than certain chance of clearing orbit. I’m nearly holding my breath waiting for it to explode and fall into the ocean. In reality, I suspect she is very much in control and that the melody and key were carefully chosen by her and the producer to highlight this technique on the edge of distortion. However it came about, it’s incredibly effective. 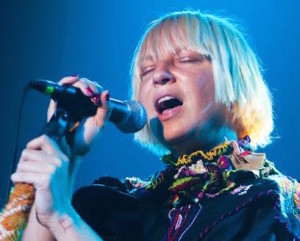 As for the song itself, it deals with despair and alcoholism. I’m sure that in my youth I would have been warned against listening to this sort of thing because of its alleged glorification of booze. Nothing could be further from the truth though. Rather, for a brief moment, the listener vicariously enters into the singer’s grief and vortex. It’s not really a pleasant ride, but full of energy and difficult to take lightly. I think the doorway is the repeated line “’cause I’m just holding on for tonight”. People of any age or station can identify with that “just holding on for dear life” end-of-your-rope feeling and from there make the jump into singer’s mind and intensity. I’ve never found (nor likely ever will) find myself serially drunk and imprisoned in a string of wild parties without hope of escape, but that is not required to relate to the emotion in the music – one has just to overlay one’s own personal challenges or feelings of being trapped along with a simultaneous resolve to make the best of it regardless. Like nearly all music, the vicarious emotion retains it’s power as long as not too many details are articulated.