I love some of the imagery and ideas in this love poem called ‘Mary, My Darling’ that I found in the Celtic Miscellany.

If I were like a wild duck with the wide hills before me, and the sight of Heaven to save my soul, I should bring the girl home if I were able, and should let her father be seeking her a while.

If I were in London as chief of the Guard, and had leave from the French to sail y ship on the sea, though I were worth five thousand pounds every day I would give her my estate, my choice is Mary.

Get up, boy, and set off on your pony, and every way you go be asking for my dear love; she was betrothed to me while I was yet a child, and I thought her nine times sweeter than the cuckoo or the organ.

The notes say it’s from an Irish folk song, so I went to look it up. Surely up would pop 20 videos to choose from on YouTube or something in Wikipedia. Nope. After nearly an hour of Googling, it became apparent that it’s most likely the tune was lyrics were never translated into English. Even the smallest snatches of it only appear in Hurlstone Jackson’s translation, which I’m holding. And even what was probably a rhyming version in Gaelic appears to have been forgotten. It appears to have only survived as a instrumental fiddle tune. 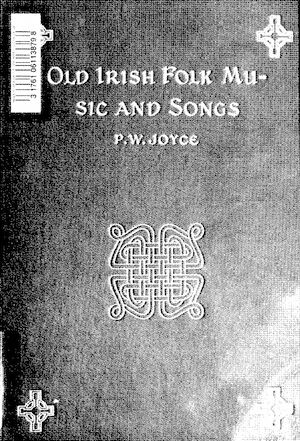 In the late 1800s, this guy Patrick Weston Joyce walked all over Ireland and wrote down as many melodies as he could find old folks to sing or pipe them. We probably owe him a lot when it comes to preserving some of this music. In 1909 he published his “Old Irish Folk Music and Songs: A Collection of 842 Airs and Songs Hitherto Unpublished”. He has this to say about “Mary, My Darling”:

O MARY, MY DARLING [1]. Irish, Air (3/4 time, “plaintive”). D Minor. Standard. AB. “There are two settings of this in Stanford-Petrie, different from each other, and both different from mine. both are in the major scale; but the tune should be in the minor: so I took it down from James Buckley, and so I heard all others play and sing it. Moreover, the ornamented setting given below, copied from Mr. Pigot, is also in the minor. There is a bad (major)_ setting in O’Daly’s Poets and Poetry of Munster, 2nd ser., p. 224, where will also be found the pleasing Irish peasant song of which this is the air. I give the tune here, partly to restore it to its proper minor form, and partly because it gives me an opportunity to record a good specimen of the variations and ornamentations which Munster fidders and pipers were fond of introducing into this and many other slow airs; such as ‘Rois geal dubh,’ ‘An rabhais ag an g-carraig,’ ‘Seadhan O’Duibhidhir an Ghleanna,’ etc. The musicians always played the simple unadorned melody first; after which came the ornamented form, or ‘Variations'” (Joyce). Joyce (Old Irish Folk Music and Song), 1909; No. 147, pgs. 74-75.

At the bottom is the notation system he used. Translated into sheet music it looks something like this: 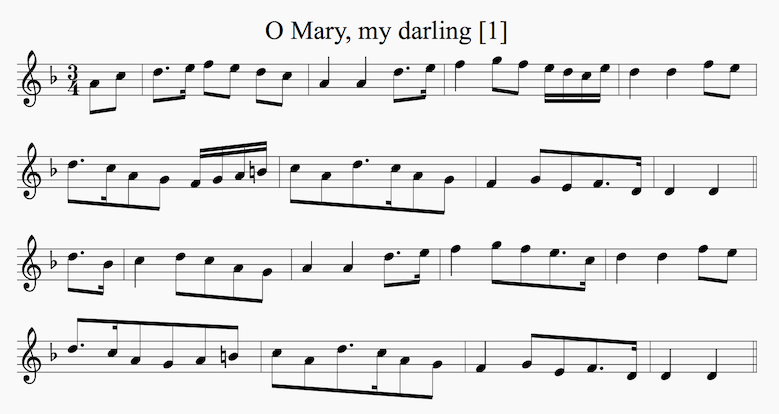 He was able to find several people that would play or hum him the tune, but even ~150 years ago, nobody volunteered any words. (He records the Gaelic words for many other tunes.) So it appears to have been lost, as far as I can tell at this distance and working through the laparoscopic portal of the web browser. To learn anything further would likely require real people and even rarer books.