Is the world boring? Go read a book, travel somewhere else, or listen to someone outside your usual circle. Learn something. Knowledge multiplies differentiation and enriches the ground underneath your very feet.

1. Late last night I went to the grocery store and filled my cart with staples for the coming week. Living in a university town, this offers opportunity to run into all kinds of interesting people, even here in rural Idaho. There was a Chinese couple buying a heavy dose of Bok Choy, some heavily perfumed Indian men in the checkout line, some brown-skinned men in turbans contemplating the yogurt section, and an old Mennonite couple buying rice. I was easily the most boring person in the shop.

Now the truth is, the Chinese couple could have been Korean. I don’t know enough to tell by sight alone. If they had been talking more I might have been able to pick up some clues in the inflection, but I was mostly at a loss. Americans who say all Asians look the same just don’t have enough knowledge to differentiate. The reverse is also true. We can probably tell the difference between New Yorkers and Texans and they can’t. I’d like to say that the guys with the turbans on where Sihk, but honestly I don’t know for sure.

Visiting and studying Africa has been enlightening. I used to think all black Africans looked the same. How silly that seems now! Ethnic Ethiopians appear so different from Nigerians to me today. The world has become more interesting. Glory! Actually, it always was that interesting, I just didn’t know it. In fact, it’s even more interesting and exciting than I can imagine right now. Learning opens the door. Broader experience opens the door. A larger vocabulary opens the door. Keep reading, keep learning, keep differentiating more.

2. Not long ago I read The Hobbit to my children out loud. Shortly after, I saw one of my daughters coloring this little picture of Smaug’s golden hoard. 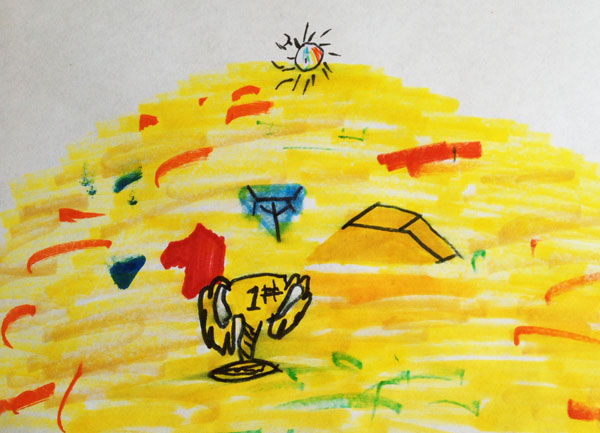 I asked her to describe what was in the picture. We have Fort Knox style bar of gold there in the middle of the pile, along with a cut sapphire and some rubies. On top is the Arkenstone of Thrain which is described in some detail in the text. But what is that golden cup in the middle? Why it’s the golden cup that Bilbo steals on his first visit. Why does it have a big #1 engraved on it? Because that’s the only sort of gold cup my daughter has ever seen – the big plastic kind given as a trophy for winning a spelling bee or a junior soccer tournament. We in the modern west don’t have much use for fancy dishes – including golden cups you actually drink out of. Would that she be a bit more familiar with something like this: 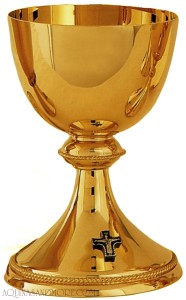 That is of course a golden chalice for serving wine during the holy Eucharist. In much of modern protestantism it has been shunned in favor of tiny non-descript thimbles. Is this an improvement? If your gravest temptation is toward gawdy ceremonialism perhaps, but it certainly isn’t a more “biblical” idea. Scripture is filled with vessels (cups) designated for different purposes. Much is made of the golden dishes in the temple, both when they are made and when they are carried away and defiled by the king of Babylon. Paul appeals to the analogy of cups made of gold, sliver, wood, and clay when describing how people who keep their lives pure are fit for different kinds of work in the Kingdom. Is taking communion akin to eating a hamburger and drinking a soda? If so, then the dishes can be the same. But I don’t think it is. I think it’s special. I suggest we reconsider the vessels we use. They are not meaningless and interchangeable but rather communicate something significant in each case.

3. A friend of mine who is working on a graduate degree in fine art recently posted on how much he loves deconstructionism. I replied that I am all for deconstruction if:

1. The thing being deconstructed is a lie, with the end of the deconstruction being the discovery of the truth.
or
2. You are tearing something apart to learn more about how it works and its inherent nature, with the end goal of understanding things more and furthering right ends in the future.

And so an engineer breaking pieces of glass to determine their strength under various temperatures is tearing something apart with constructive ends. A drunk vandal breaking windows out of a vacant business downtown (happened yesterday to another friend of mine who is remodeling the joint) is tearing things apart with only destruction as the end.

A surgeon cutting open a man to see how poison has affected his liver has a constructive end to his tearing apart. Another doctor may cut a man open with the goal of showing how he is just an animal or just a lump of tissue, or even just a pile of loosely connected atoms. Such as he are in service to the void, the deceiver, the destroyer.

There is a deconstruction of gender roles that seeks equality and justice and fair treatment and the ending of abuse. But there is another sort of tearing apart of the notion of man and women that ends in confusion, destruction, and nihilism. The line between the two can be crossed when a person’s underlying theology is faulty.

There is a deconstruction in music that yearns to strip away trash picked up along the way and find what diamonds remain underneath. There is another kind that aims to find that all tones are trash or that maybe everything coming into your ear is trash. Arnold Shoenberg and John Cage respectively, in case you are wondering.

The same goes with visual art. There is a deconstructionism of paint or of form that ultimately seeks to find beauty when the pieces are all lying in a heap. There is still an imagination yearning to put them back together into something new. But the way this often goes in the modern academy is to disassemble beauty and then just leave it on the floor and call it finished, implying that the destruction is the thing of worth – the disenchantment of the world is something worth beholding. This is sick and wrong and no amount of laudation by critics will ever legitimize it. Everyone needs to stop what they are doing and go read Aquinas, or Aristotle if you can’t stomach that.

So there is a knowledge which increases diversity of thought, and this is a good thing. But it still has to be put to constructive ends. One can learn all about the people of Africa and love how different and interesting everyone is with their varied shapes, languages and strengths. One can also learn that they are NOT so different than one’s self. This is perhaps an even greater lesson. In the end though, one’s motive comes from the heart and that is a thing that needs renewal via the Spirit, not greater learning.